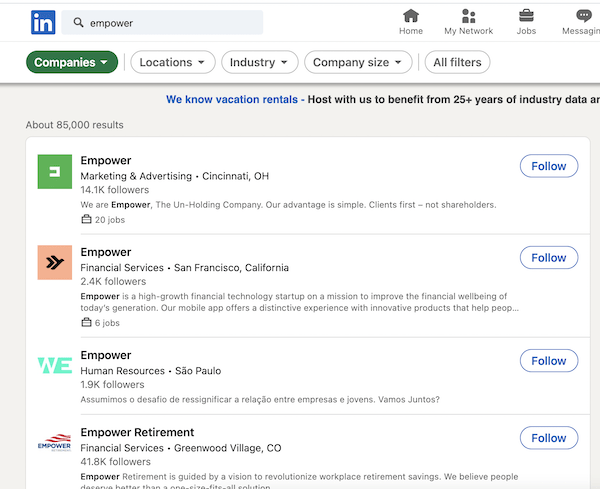 Empower.com is an exceptional domain name, and it is quite valuable. In fact, I made at least a couple of efforts to acquire this one word .com domain name. As you can see in the image above, there are tens of thousands of company listings on LinkedIn for a search of “empower.” According to DomainTools, there are 332 domain names currently registered with Empower as the sole keyword, and more than 63,000 domain names are registered that have “empower” in them.

I believe “empower” is a meaningful and descriptive word, and Empower.com would have substantial value to many companies.

According to an article in Bloomberg Law (subscription required), a Anti-Cybersquatting Consumer Protection Act (ACPA) lawsuit was filed against the registrant of Empower.com by a company that operates a subsidiary called Empower Retirement, LLC. According to the lawsuit (which can be accessed via CourtListener), “Plaintiffs launched the EMPOWER Brand nationwide in the fall of 2014.” Empower.com has a creation date of July 26, 1994. In fact, the plaintiff conceded that the defendant owned the domain name long before its brand was created:

It should be noted that one of the defendants in this lawsuit is a company called Empower Geographics, Inc.

From what I understand, the plaintiff in the lawsuit tried to acquire Empower.com, but the domain registrant’s “multi-million dollar purchase price” was deemed too high in the opinion of the plaintiff. The plaintiff also believes the defendant was targeting it as a prospective buyer. In the lawsuit, the plaintiffs claim, “Defendants are not using the Empower Domain for any legitimate business-related function (and have not in over five years) and are simply engaged in the textbook definition of cybersquatting.”

You should note that a cybersquatting lawsuit is different than a UDRP filing. In the UDRP, the complainant would need to prove that the registrant registered and used the domain name in bad faith. Since the plaintiff conceded that the registrant registered the domain name prior to its existence, that would have been impossible to prove. In a cybersquatting lawsuit, the requirements are a bit different.

When the plaintiff launched its Empower Retirement brand, it did so knowing another entity owned the Empower.com domain name. It also knew there were many other brands that had Empower in it.

When you visit Empower.com, there are no pay per click links to competitors or anything else that would mislead customers into thinking they are on Empower Retirement’s website or another company with Empower in branding for that matter. In fact, the landing page makes it clear that Empower.com is for sale rather than try to confuse people who navigate there:

That being said, I think this could be considered reverse domain name hijacking, and I would not be surprised if the defendant countersues the plaintiff seeking damages.

In my opinion, the registrant of a descriptive domain name is well within its right to maximize the value of the domain name. Empower.com is not valuable simply because of the plaintiff’s brand. I think Empower.com is valuable because it’s a strong keyword that is used by many brands. If I owned the domain name and was willing to sell it, I would be asking for seven figures.