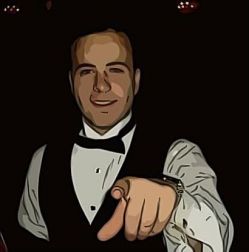 Jay blogged about a new website called BeFunky.com, which turns photographs into cartoons. I just spent a half hour exploring their site, and I am impressed!! This is one of the coolest things I’ve seen in a while – AND there is no cost right now. I would recommend requesting an invitation from them and have some fun.

This would be a cool way to create “Save the Dates” for my wedding in August.

Elliot Silver
-
October 5, 2007
2
New e-mail scam: Hit-man threat
The Boston Globe had an article about an email scam that is making its way into inboxes around the country. The email informs the recipient that a “hit” has been taken out either on the person or a loved one, and they must pay a sum of money to remove the hit. Although the email would certainly be immediately recognized as a scam by recipients, it can be unnerving to receive an email like this. According to the article,

“The FBI received 115 complaints of similar e-mails reaching people across the country in less than a month last winter, according to its Web site. The e-mails vary only in the amount of money demanded, ranging as high as $80,000.” Source: The Boston Globe

The FBI has a website that offers warnings and information about email and online scams. Additionally, the Internet Crime Complaint Center (IC3) also offers people the opportunity to report cyber crimes.

As always, never click on links in emails – especially when they are from unknown individuals. If you are ever in doubt about an email you receive, contact your local law enforcement agency.

Domain investors often believe domain names are the most frequent target of overbearing trademark holders. That isn’t always the case as evidenced by a recent lawsuit. According to Page Six of the New York Post, singer Jimmy Buffet is suing Six Flags theme parks for infringing on his trademark rights. Six Flags has a 10,000 member “Carrothead Club,” for children who are fans of Bugs Bunny. Buffet believes the name of the club infringes upon his trademark, “Parrotheads,” as his fans are known. The New York Post says that Six Flags has “no plans to discontinue the club.”

A couple of weeks ago brought the passing of Rabbi Nardus Groen, the grandfather of a close friend of mine. Having met Rabbi Groen a couple of times in Florida, I briefly knew him as a kind man who was very generous to his family and friends. It wasn’t until his funeral a little over a week ago that I learned just how heroic of a man he truly was.

Originally from The Netherlands, Rabbi Groen was one of the few Jewish people who learned how to operate a gun in the beginning of World War Two, fearing the advancement of the German Army. Unfortunately, there were many members of the Dutch Jewish community who disagreed with this, and criticized Rabbi Groen for his actions. As the threat of the German army began to spread, Rabbi Groen joined the Dutch Underground, a group of men and women who did what they could to help save their fellow countrymen during the war.

In 1940, the Germans began to persecute Jews living in the Netherlands, ultimately killing around 75% of the Jewish population. One day, Rabbi Groen was responsible for guarding the Jewish Hospital, which was lucky enough to have evacuated the patients, but still had a large amount of Jewish nurses who hadn’t had a chance to escape. Upon hearing that a group of Nazi soldiers were approaching the hospital to either kill or capture the Jews, Rabbi Groen ushered the nurses into a small room, donned a Red Cross armband, and stood outside the room to greet the soldiers. When they asked who was in the room, Rabbi Groen calmly responded that he was guarding a group of nurses, each of whom had the highly contagious and deadly Scarlet Fever. Fearing the germs more than hating the Jews, the Germans fled the hospital and the nurses were saved.

For Rabbi Groen, not only did he save the lives of a large group of Jewish nurses, but he also saved the life of his future wife Sipora. Rabbi Groen and Sipora went on to live a wonderful life together for 63 years, and had several children, grandchildren and great-grandchildren.

I know this isn’t a domain name related story, but with the permission of my friend Justin Groen, I wanted to share it with visitors to my blog.

Elliot Silver - October 27, 2020 0
Earlier this month, I wrote about how domain names added to Uniregistry were being listed for sale via Afternic. This served as a bit...

No Win Scenario with TrumpTowerMoscow.com

Elliot Silver - October 26, 2020 4
TrumpTowerMoscow.com is a domain name that has been owned by The Trump Organization since 2008. From what I can tell using Screenshots.com, the domain...

Elliot Silver - October 25, 2020 1
This morning, Presidential candidate Joe Biden tweeted out a link to MakeAPlan.com, and President Barack Obama also mentioned the domain name in a tweet: In...

The Domain Name is Subject to Re-Pricing

Elliot Silver - October 23, 2020 2
Oftentimes, I price a domain name on Afternic and/or DAN at the time I acquire the domain name, and I don't go back to...

Elliot Silver - October 22, 2020 1
The Internet Commerce Association (ICA) is seeking nominations from within the domain name investment community for the 2021 Lonnie Borck Memorial Award. The award,...