.NYC Running “Best of Boroughs” Contest with $25k in Prizes

Neustar, the company that operates the .NYC registry, is running a contest to help promote its .NYC extension locally. The contest is dubbed the “Best of Boroughs,” and it will award five prizes in the amount of $5,000 each. There will be one winner chosen from each of New York City’s five boroughs (Manhattan, Queens, Brooklyn, The Bronx, and Staten Island).

The contest is for people and organizations who use a .NYC domain name for their website. Here’s how the contest is described:

Best of the Boroughs in a citywide contest that celebrates the local businesses, organizations and community individuals that make our city, and each borough, a unique place to live. These individuals love the City so much it’s in their web address.

Entrants across NYC will submit applications on what makes their .nyc business, website, store, organization or idea the best of their borough. There will be one winner chosen from each of the five boroughs and named the Best of Bronx, Brooklyn, Manhattan, Queens or Staten Island, depending on the borough in which they reside.

The contest is open to “any business or entity with a working .nyc website in use prior to 9/4/2018.” I am sure there are

END_OF_DOCUMENT_TOKEN_TO_BE_REPLACED

How I Evaluate GeoKeyword Domain Names

I own a fair amount of geographic keyword domain names. I don’t know how many I have right now, but I would guess the number is around 30+/-. I have only sold a few of them in the last few years, but I want to share some thoughts I consider before purchasing them (typically in auction or hand registrations).

Most of the geographic keyword domain names I own have the following attributes:

One of the more important aspects is the relevance to the city. Buying snow related domain names might be good for northeastern US cities, but they would not be good for Florida cities. This is probably common sense, but it is something that needs to be considered at the outset.

END_OF_DOCUMENT_TOKEN_TO_BE_REPLACED

I received an email earlier this week from BrandIT (formerly Igloo.com) announcing that they are brokering two exceptional California geographical domain names: SanFrancisco.com and LosAngeles.com. These two domain names have been owned by Boulevards, a company founded by Dan Pulcrano. Boulevards has owned a large portfolio of exceptional city .com domain names.

Curious about why Dan decided to sell these valuable geographic domain names, I spoke on the phone to get his perspective. Dan told me what many people have learned the hard way: developing a network of websites, especially local websites like the ones Boulevards focuses on, is very difficult and expensive. Dan told me his company is using this as an opportunity to raise funds for his other core websites.

Although Dan did not share the asking price for these domain names, I think it is safe to say that each has a low seven figure price tag. Dan referred to his last publicly announced sale of Denver.com in 2012 as a guideline. As I later reported in 2015, that purchase paid off for Peter Niederman and his real estate firm. In addition, the parent company of the LA Times acquired LA.com last year for $1.2 million. Should SanFrancisco.com sell in this price range, the irony is that the cost would be almost equivalent to the price of a one bedroom apartment in San Francisco!

Commenting to me about the listings, BrandIT’s Tessa Holcomb had this to say:

“Geo domains have always been a strong niche for us originating with the sale of several country domains, then shifting to major European, Asian and US cities. Few US cities, however, are better known than San Francisco and Los Angeles. These metropolis regions are not only synonymous with the tech and entertainment industries, but they also are important hubs for tourism, recruiting, and real estate. Being from California myself, I am very excited to market the SanFrancisco.com and LosAngeles.com domain names and look forward to seeing how these valuable properties evolve.”

There are many ways a buyer could use each of these domain names. Of course, tourism, local news, and real estate would likely be the most obvious uses. Perhaps a buyer will successfully do all three of this.

Prospective buyers who are interested in these two domain names should get in touch with BrandIT.

A .org domain name came across my email this morning that caught my attention. RhodeIsland.org is listed as one of the most active pending delete backorders on NameJet. At the present time, there are 24 bids with a high bid of $101 on NameJet alone. Since most of the major drop catching platforms will likely try to catch this domain name, I presume there are many other bidders standing by ready to place bids on this domain name.

After seeing RhodeIsland.org on the most active pending delete list, l did a Historical Whois Search at DomainTools to see who previously owned the domain name before it went into the pending delete status. According to DomainTools, RhodeIsland.org was registered to Rhode Island Economic Development Corporation as recently as September 6, 2017. The Whois registrant email listed an @riedc.com email address. Very strangely, the registry expiry date is listed as June 24, 2018, so it doesn’t look expired despite its “pending Delete” status.

I looked at Archive.org, and it does not look like RhodeIsland.org was used as

END_OF_DOCUMENT_TOKEN_TO_BE_REPLACED

According to the Malibu Times (found at MalibuTimes.com), the Malibu.com domain name was listed for sale by its owner. This can be confirmed by visiting Malibu.com, where the domain name owner has set up a “for sale” landing page with information about submitting an offer.

I don’t believe this is the first time Malibu.com has been offered for sale. According to an article in DomainGang.com, the domain name was listed for sale via Ryan Colby’s Outcome Brokerage in 2014.

Since the domain name was likely listed for sale before, the most interesting aspect  of the Malibu Times’ report (in my opinion) is how much a Councilman for the City of Malibu is trying to get the council to approve to make an offer to buy Malibu.com. From the news report  mentioning that Malibu.com is for sale:

END_OF_DOCUMENT_TOKEN_TO_BE_REPLACED

It’s not every day that you see a company bragging about its domain name portfolio in a mainstream publication like Saunders & Associates did in today’s  New York Post: 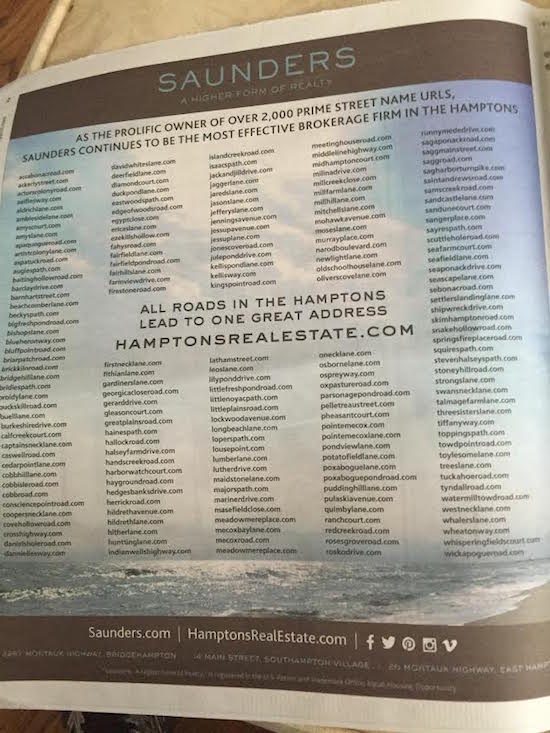 As you can see, Saunders is sharing that it owns over 2,000 street name domain names focused on the Hamptons. The paid advertisement was found on the inside cover of today’s (Saturday) New York Post, one of the largest newspapers by circulation in the US. I am unsure if this advertisement was found in all editions of the NY Post or the local edition. The NYPost has a circulation of over 720,000.

I visited several of the domain names listed in the advertisement, and it looks like they

END_OF_DOCUMENT_TOKEN_TO_BE_REPLACED

Elliot Silver - July 7, 2020 2
The Verge published an article about a teleconferencing startup that recently raised 7 figures in funding and its name made me think, "hmmmmmmm." The...

Elliot Silver - July 7, 2020 0
10 years ago in June, the late and great Lonnie Borck kicked off the launch of the .CO extension by purchasing e.CO at a...

Elliot Silver - July 6, 2020 0
I've never really been a super early morning person, but the coronavirus pandemic has changed my morning habits. The early morning has becomes the...

Watch Out for “Generic” Sounding Trademarks

Elliot Silver - July 6, 2020 3
Every day, I see quite a few domain names in auction with bids that could have trademark issues. Some of these trademarks are super...