Please note that the back-end Sedo update is still in progress, and the TLD will be listed in the search TLD filter once the update is complete this afternoon. Everything should be set by later this afternoon or possibly tomorrow.

I am still traveling today (almost back from vacation), so this is a guest post by Bobby Fitzgerald about how it appears that Google Adsense for Domains has changed/enhanced its landing pages by adding graphics. As you may recall,  Bobby previously discussed how  RestaurantsAgainstCancer.com was developed to raise money for the children of  Camp Sunrise.

As I continue on my journey to learn this business I noticed something recently. Google has greatly improved the graphics of their Google for domains. Recently I have been moving a number of domains I plan on holding, or developing, to Google. I had been using a couple of the parking companies and was not seeing any income what so ever on over 100 unique visits a day. I believe someone who lands on a parked page will only make one click the vast majority of the time. They also need to see a trusted, related, choice like a hotel chain on a geo or travel site or a restaurant on a geo restaurant site. Just MHO.

Having read more than one of the industry leaders comment that parking income covers all or near-all renewal fees I decided to mix it up so the march to Google parking began.

Rather than just stating that, “Below are sponsored listings for goods and services related to…” as you see below:

Google now has a tighter window with color backgrounds and photos as well as a banner ad that is visible in the initial window.

There are 24 images to choose from within Google Adsense for domains.

The reality is my revenue has gone up and I will cover the cost of renewals if the trend continues. While I enjoy the traffic stats offered by the parking companies, money talks and, well, stats can walk. One thing I have done is use a parking company to test if there is any traffic at all and if so then move to Google where income appears to be happening. Hopefully Google will continue the improvements and offer traffic stats for each domain or the parking companies will up their game. I am still new enough to not understand how splitting Google ad income with a parking company can be more profitable than parking with Google directly, but that is why I am doing this-to learn. 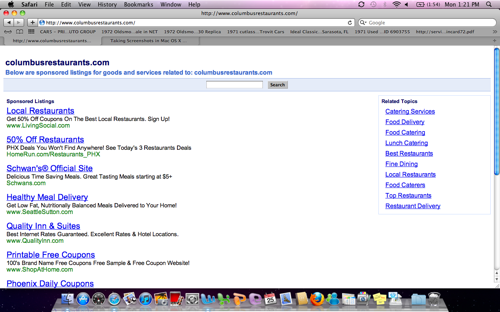 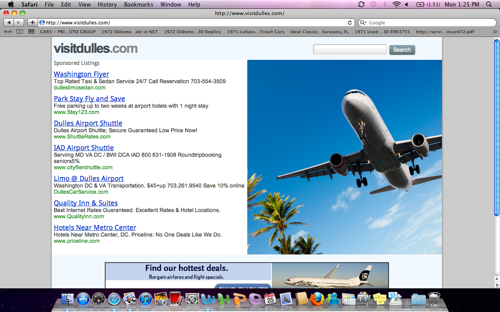 New Big Jumbo Promo: Get an iPad, iTouch, Flip Camera, or Other Electronics

I learned about a brand new promotion being offered by Big Jumbo, and I hope Andrew doesn’t get too upset for posting it here before it’s officially announced 😀

When you open a new “InstAccount” at Big Jumbo beginning February 1, 2011, you can select one gift from each of 4 different revenue levels, and for the highest level you reach during the first 30 days, you’ll receive the gift you selected (you get only the one gift at the highest level you achieve). Gifts start at just $300 in revenue a month and go up to $3,000.

Here are the 4 revenue levels and corresponding gifts to select:

Domain investors who sign up at DomainFest have a bit of an advantage for this promotion. If you sign up for an account at the event you get until March 10 to hit the numbers. If someone signs up on BigJumbo.com they have 30 days to hit the numbers.

I know there are people who swear that more minimal landing page graphics are better for click through rates and ultimately revenue on parked domain names. There are also people who think that a better looking landing page creates a better user experience for visitors, and they will stick around longer as a result.

My company doesn’t do enough parking to really test these theories enough for me to take a guess. However, I’ve recently seen a couple of nice looking landing pages and wanted to share them with you.

The first one is for CampingSupply.com, which appears to be a Dotzup lander based on the DNS. The pictures match the domain name and theme perfectly, and the center links make the lander look like a developed website. I would imagine the links are hand selected to give visitors the options they would expect on a camping supply website. I don’t know the owner, but I believe he has a number of good domain names.

The second landing page I like is a weight loss theme from Domain Advertising. Although they can’t link to the actual website, you can see the test theme on their internal review website. Like the aforementioned landing page, the links are hand selected, and highly relevant to the theme. It’s very easy to navigate, and it looks very similar to a developed website, which probably helps with trust, time on the site, and perhaps CTR.

What are your thoughts on custom landing pages, and have you seen any nice looking ones recently?

I would like to welcome a new advertiser to my website, Domain Advertising. You may have previously met company representatives at a domain investment tradeshow or read about the company’s founding in a profile, written by Ron Jackson. Domain Advertising is led by domain industry veteran, CEO Dan Warner, and the company has significant financial backing from the Ashmore Group and the Directi Group.

One of the primary offerings of Domain Advertising is what they refer to as “hyper contextual parking solutions.” The company can help domain investors create and test fantastic looking landing pages with a focus on generating maximum revenue for its customers.

Each domain name is optimized with hand selected phrases based on commercial usage and search volume, and the landing page is designed by hand with individually selected images placed by designers. Domain Advertising has an extensive library of images covering hundreds of verticals.   Each image is contextually specific enough that they qualify to be used as clickable images when used in conjunction with the bound phrases – a function not allowed in Google systems. This level of customization can be tested and optimized on an ongoing basis, helping to drive additional revenue.

Although I can’t share links to specific landing pages because of the rules of sending traffic to a parked page, I can share a few sample landing pages the company created and hosts:

When I go out with friends, I am generally a beer drinker, but if I am drinking liquor it’s usually a Ketel One and soda or Ketel and Red Bull. If I am having a “tropical” drink, it will usually be something with Captain Morgan’s Spiced Rum.   I want to share what I think are a couple of liquor company domain name follies with you.

Captain Morgan is known for its Spiced Rum. They have other products of course, but if you ask for Captain and Coke, you’ll probably get a Spiced Rum.   Smartly, Diago, the maker of Captain Morgan products, owns SpicedRum.com, and when you visit SpicedRum.com, you’ll be forwarded to CaptainYourHalloween.com. I assume this was for a short term promotion, but they never changed it back. To make things worse, CaptainYourHalloween.com is a parked page.

I emailed the Chief Marketing Officer of Diageo back in January of 2009 to let him know of the issue.   We exchanged a few emails, and he put me in touch with the Director of Digital Marketing. It’s now over a year later, and the domain name still forwards to the same default parked page.   Someone is making money on it, and it’s probably not Diageo.

The second liquor “faux paux” (in my opinion) comes from a company called Wodka Vodka. The have a large billboard on the Henry Hudson Parkway in New York City with a call to action, encouraging drivers to visit WeLoveWodka.com.   As you can probably guess, WeLoveVodka.com is owned by another company. It wouldn’t be so bad if the W and V didn’t look so similar, but if you’re passing it at 50mph, chances are good that there will be a lot of people who visit the wrong domain name.