GoDaddy is a privately owned, Internet-based company that provides a variety of services including domain name registration, web hosting and e-business software sales. The company, which is headquartered in Scottsdale, Arizona, was founded by Bob Parsons. Parsons previously owned a financial services software company, which he sold in the mid-1990s upon retirement. He came out of retirement in 1997 to form Jomax Technologies, the predecessor to GoDaddy.

Since it’s inception, GoDaddy has risen to become the largest domain registrar in the world, with tens of million of domains registered to its clients. The company ranks as the world’s largest ICANN-accredited registrar; it’s approximately four times larger than its nearest competition. Recent corporate acquisitions include Outright, Locu, Afternic, and Media Temple.

GoDaddy has redefined Internet hosting services, and it has been the recipient of numerous industry awards and accolades. Among these awards are the 2001 Arizona BBB award for Business Ethics and the 2011 SC Magazine award for Best Security Team. In 2011, it ranked number four in the Phoenix Business Magazine list of “Best Places to Work in the Valley” and it made the 2012 Forbes list of “Best 100 Companies to Work For.”

Known for its sometimes controversial commercials and interesting spokespersons, GoDaddy also sponsors a number of charitable causes in support of domestic violence and child abuse awareness, and sports events, including NASCAR and the Super Bowl. In 2013, the company shifted its advertising strategy to focus more on small to medium sized business owners (SMB). Reflecting this change, its commercials and advertising materials shifted from “sexy” to smart.

I thought about this for a few days, and want to share my top ten domain tools and websites that are beneficial to my business. While this does include a few news websites, I consider them tools because the information provided is used to bolster my business.

These are in alphabetical order.

What are your favorite tools/websites?

According to a post on the .CO Registry’s blog, Godaddy will use at least one of its Super Bowl commercials to inform consumers about .CO on the massive stage that is the Super Bowl. Each year, millions of people across the world watch the Super Bowl, and advertising on it was one of the primary ways Godaddy first became a household name.

One can assume that when the Godaddy Super Bowl commercial mentioning (or featuring) .CO domain names airs, a lot of people will be interested in learning more about .CO domain names. They will visit Godaddy.com, and they will search for their favorite .CO domain names, hoping to register them.

It might be a very smart idea for you to list your .CO domain names for sale on Godaddy’s sales platform, where your name may be seen if a visitor searches for it or for something similar. The sales commission rate is very high at 30%, but when you consider the potential exposure, it’s not so bad.

Update: WikiLeaks.org Not Online, Neither is WikiLeaks.com

First it appeared that Godaddy (or Wikia, Inc.) was monetizing WikiLeaks.com traffic that was intended for WikiLeaks.org website by placing sponsored links on the standard coming soon landing page.

Next, it appeared that Godaddy had taken down all of the sponsored links on the WikiLeaks.com landing page, perhaps in response to complaints about it monetizing the traffic. Some people still felt this wasn’t the right thing to do and thought that Godaddy should not have WikiLeaks.com resolve at all.

Now, the day after the DNS was removed from WikiLeaks.org, effectively taking it offline (until it moved offshore to WikiLeaks.ch), it appears that WikiLeaks.com has nothing on its website. The current WikiLeaks.com website says “Sorry this site is not currently available.” 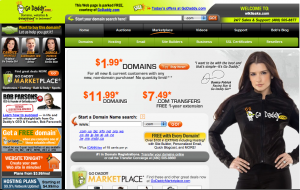 I wrote an article last Sunday  about the WikiLeaks.com domain name. It’s owned by a company called Wikia, Inc. and it recently had a coming soon landing page with pay per click advertising links. Every time someone clicked on one of the Sponsored Links, Godaddy would earn some revenue (and possibly Wikia, too, if they were parking the domain name with Godaddy).

Apparently someone at Wikia, Inc. or Godaddy decided to change this landing page, and there are no more PPC links showing.

Bob Parsons is known to be a proud patriotic American. He is also a very, very wealthy man, and as the owner of one of the largest and most generous companies in the state of Arizona (maybe even the US), I don’t think the money that was being generated was substantial to Godaddy’s bottom line.

Kudos to Parsons, Godaddy, and/or Wikia for opting to not monetize traffic that was looking for the WikiLeaks.org website, which has certainly damaged the reputation of the US and others in the world.

Who Makes Money from WikiLeaks?

WikiLeaks.org is a website that publishes leaked (usually confidential) documents and memos from governments and companies. These documents are often embarrassing  to those behind the documents, and the website receives a lot of interest shortly before and after it releases documents. It’s been in the news quite a bit lately, and is almost always referred to as “WikiLeaks” without the domain extension.

I don’t know much about the organization behind WikiLeaks.org, so I can’t say how (or if) they generate revenue, but it looks like at least one company makes some money as a result of WikiLeaks, and the company is based in the United States.

A company called Wikia,  Inc. from San Francisco owns the “typo” WikiLeaks.com, and the domain name is not developed. However, there are pay per click (PPC) links on the landing page, which appears to be monetized by its registrar, US-based Godaddy. You can see the “Sponsored Links” on the left hand side of the page.

At its peak, Compete.com reported that WikiLeaks.com received over 230,000 visits in July of 2010. It also appears to be close to the 100,000 visit mark last month, and will almost certainly increase as WikiLeaks.org release new confidential documents.

Of course, this traffic pales in comparison to the actual WikiLeaks.org website, but the traffic is still substantial. I wonder how much Godaddy is earning from this typo traffic.

I almost feel like I participated in a miraculous situation last week when I was transferring a domain name. I bought a domain name that was registered at Godaddy, and it was pushed to my account  instantly. I then flipped the domain name the next day to another domain investor. The reps at Godaddy helped to unlock the name within a couple of hours (they lock it for security measures), and it was ready to transfer.

I sent the domain name’s authorization code to the buyer, and within 10 minutes of his requesting a transfer to his registrar, I received an email asking me to confirm. I confirmed that this was legit, and under an hour later I received an email from Godaddy asking me if the transfer was legitimate, which I immediately accepted within my Domain Manger at Godaddy account.

Under 30 minutes later, I  received  an email from Godaddy confirming that the domain name was successfully transferred.

I don’t understand why it takes so long (up to 5 days) from other domain registrars. Are their systems antiquated and they can’t quickly process transactions as fast as Godaddy? Or is it a stall tactic in the hopes that the transferrer changes his mind?

Whatever the case, I appreciate the quick transfer speed of Godaddy.

How I Use Dropping.pro for Domain Sales Lead Gen

Elliot Silver - September 23, 2020 2
In response to yesterday's article about using contact forms to sell domain names, two readers asked me for more information about my usage of...

Original Domain Investor is “‘psychedelic concierge’ to the stars”

Elliot Silver - September 22, 2020 11
I was reading the New York Post this afternoon, when I came across a photo of a person I recognize, Mike Zapolin, known to...

Elliot Silver - September 22, 2020 8
I haven't been doing a whole lot of outbound marketing to sell domain names this year, primarily due to the pandemic and economic fallout...

Elliot Silver - September 21, 2020 5
A UDRP was filed against Spase.com at the World Intellectual Property Organization (WIPO). The domain name is registered to Mrs Jello, LLC, the company...