I’ve covered the .CO launch pretty extensively, but I continue to field emails and some phone calls asking for advice, so I want to share a little bit of additional insight from a personal standpoint to answer any lingering questions.

As you’re aware, I was awarded a .CO domain name, which I hope to reveal this week. It didn’t cost me anything, but I have to build a website on it and market it, which will be expensive. It’s a geographic area I like to visit, so while the goal is to make money, I may also be able to write off some research. That will be up to the accountant to ultimately determine once the time comes.

In addition to this, I bought 5 domain names .CO domain names via NameJet. I wasn’t planning to back order many, but at the last moment I backordered 39 of them and they secured 5 I think.   None of them are significant nor were intended to play on trademarks. For example, I got Elliot.CO and Torah.CO.

You can look around and see that .CO has paid for advertising on my blog (small banner from the registry going back up tomorrow and a banner from Register.com below my posts), so keep in mind that I can’t be completely unbiased despite the fact that I feel like I am offering my unbiased opinion. I do make money from blogging, but I am first and foremost a domain investor/speculator and hope that this is conveyed below.

That said, I do think this is going to be a widely used extension because .CO makes sense to me and will resonate with others who could not afford a 6 figure .COM. Names that would cost 6 or 7 figures in .COM should be considerably less in .CO, unless speculators keep them off the development market, which could ultimately hamper its usage. However, with so many names bought by domain investors, I am sure there will be plenty who can’t afford to hold out too long.

In my opinion, the widespread usage by big brands is what will make it a valuable investment. Whether this happens is unknown for now though. Despite the fact that many brands did secure .CO domain names, it remains to be seen whether they will be used and promoted or simply used for defensive purposes. I don’t know. You don’t know. We don’t know.

Yes, I think the Founder’s Program was very smart because it guarantees that there will be many sites that use .CO and actively promote it. This is good for investors. The primary reason .CO domain names could become valuable is because regular people and companies want them as an alternative to .COM.   Will this happen? I don’t know. You don’t know. We don’t know. I think it might and others think it might not, but at the end of the day, it’s not us who will determine whether they will have significant aftermarket value.

This is pure speculation. Invest cautiously and invest smartly. Some people who invest heavily may be rewarded very handsomely if .CO becomes more popular than .NET and other extensions. If this doesn’t happen, some people may lose a lot of money.

As I’ve told the people who have emailed me, “I am holding off on a bigger investment until I see what companies do with their .co names and how the aftermarket shapes up.”   I am going to build my Founders Program .CO domain name soon and will do my best to earn my investment back.   It’s pure speculation at this point, but my business model was built on speculation.

Tomorrow is a   big day for the .CO Registry, as they will be publicly launching in the afternoon at 2pm EST. People will begin finding out if the .CO domain names they ordered were secured by their domain registrars, and others will learn more information about auctions and domain availability.

I received an email from the .CO Registry with some impressive news and updates I thought I would share.

I know a number of people who are buying .CO domain names, and I personally back ordered around 10 or 12 of them. I am not making a huge investment right now (aside from the development cost of the Founders Program name I was awarded), but I think this extension is going to strong results.

As I’ve said here in the past relating to .CO and other extensions, I’d rather invest heavily when I see the money rolling in and a solid aftermarket formed, even if it means less upside. There’s less risk when names begin selling for high values on the aftermarket.

Surprisingly to me, nobody correctly guessed the Founders Program domain name I was awarded; however, I am not going to reveal the domain name yet until it’s in my possession. Hopefully that will be soon and development will start ASAP.

I’m sure you’ve read about .CO domain names by now, but if you would like to take action but haven’t yet, this should serve as a reminder that the general availability date is Tuesday, July 20, 2010. If you are interested in buying a domain name that will be sought after by many, you should ensure that your order is placed ASAP.

According to NameJet, where preorders close at 8pm on July 19:

“General Availability, which means the normal registration period for .CO where no trademarks are required, will open at precisely 11:00 am PDT, July 20, 2010. It’s important to get your names in early before the pre-order queue closes.

.CO is the new domain extension that offers people and companies more choice in branding their online presence with a truly global, recognizable, and credible domain name. It’s the online space where people can fulfill their dreams and the world’s next great enterprises will have a home.”

The .CO Registry has already awarded their domain names as part of the Founders Program, and my proposal was approved, so I was awarded a .CO domain name. More on that later on, but for now, if you want to pre-order .CO domain names, the time to do so is now.

What an interesting week in sports for this Boston fan. First, the Celtics lost a tough game 7 of the NBA finals to the Lakers who had a great game by Ron Artest. Surprisingly, I think Artest was the best player during the Finals, and it was neat to hear about him celebrating the victory in Hollywood after the game in his full uniform.

The following morning the US soccer team faced a difficult opponent in the World Cup – referee Koman Coulibaly, who disallowed what would have been the winning goal on a phantom foul. “Sleepy Eyes,” as he is known throughout the soccer world due to his droopy eyelids, now has a website dedicated to him – KomanCoulibaly.com (not mine).

On to some Sunday updates:

COme to the e.CO Party in NYC 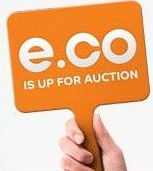 As I mentioned here a couple of weeks ago, Sedo has teamed up with the .CO Registry and together they will be auctioning off the premium, one letter domain name e.CO, with the proceeds from this auction going to the charity of the winning bidder’s choice. The final live auction for this domain name will be held on June 10th at 4pm in New York City, at the conclusion of Internet Week.

To help celebrate the auction and encourage bidding, the .CO registry will be hosting a fun event, “COcktails & e.CO! LIVE Auction Finale” at the Soho Grand Hotel, Harbor Room in New York City (310 West Broadway) at 2pm on Thursday, June 10th. Of course, you can also bid for e.CO online.

If you live in the area and would like to attend, please register for the event online (you MUST register before). It’s free to attend, and I am sure there will be plenty of domain investors and other Internet entrepreneurs in the crowd. Have a drink, meet other people in the space, and introduce yourself to the representatives of the .CO Registry to ask any questions.

No Win Scenario with TrumpTowerMoscow.com

Elliot Silver - October 26, 2020 1
TrumpTowerMoscow.com is a domain name that has been owned by The Trump Organization since 2008. From what I can tell using Screenshots.com, the domain...

Elliot Silver - October 25, 2020 1
This morning, Presidential candidate Joe Biden tweeted out a link to MakeAPlan.com, and President Barack Obama also mentioned the domain name in a tweet: In...

The Domain Name is Subject to Re-Pricing

Elliot Silver - October 23, 2020 2
Oftentimes, I price a domain name on Afternic and/or DAN at the time I acquire the domain name, and I don't go back to...

Elliot Silver - October 22, 2020 1
The Internet Commerce Association (ICA) is seeking nominations from within the domain name investment community for the 2021 Lonnie Borck Memorial Award. The award,...

Why I Want to Know Who the Buyer Is

Elliot Silver - October 21, 2020 10
Ammar Kubba shared a back and forth he had with a prospective buyer for a domain name who apparently did not identify himself or...