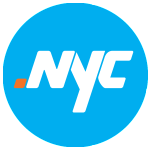 According to a press release found on NYC.gov:

“New Yorkers are constantly innovating and putting this great city on the digital map,” said Mayor Bill de Blasio. “The launch of the .nyc domain is one of the most anticipated arrivals for the city and the Internet at large. There is no shortage of New Yorkers ready to claim their exclusive .nyc identities online, and this is their chance to reserve their piece of this city’s valuable digital real estate.”

In addition to announcing the beginning of the .NYC sunrise period, the press release also announced the Founder’s Program for people who wish to build on .NYC domain names. “The .nyc Founders Program offers qualified businesses and individuals the chance to apply to be considered a .nyc “Founder,” meaning they will not only have the opportunity to get the perfect .nyc domain before the general public, but their developed website(s) will be promoted and showcased in many of the .nyc promotional launch efforts,” according to the press release.

As I said before, I believe that geotargeted new gTLD domain names like .NYC are going to be some of the most successful new domain extensions. I particularly like .NYC perhaps because I lived there but also because it’s a brand in and of itself.

Unfortunately, I will not be able to buy any .NYC domain names because of the .NYC nexus policy that requires registrant to live or have a physical address in the City. Perhaps the rules will be relaxed or I can register .NYC domain names in the name of family in NYC, but I will be on the sidelines for at least the beginning.

If you’re in New York City and you see some cool .NYC marketing, let me know about it. I wouldn’t be surprised to see the City and Neustar team up to make New Yorkers aware of the new .NYC domain names, and I’d like to see what you find.

Elliot Silver - January 18, 2022 0
Last Summer, a prospective buyer made an offer on one of my domain names that was too low for me to accept. I had...

Elliot Silver - January 14, 2022 2
In May of last year, I wrote about the possibility of fractional domain name ownership coming to Rally, a venture backed platform that allows...

Elliot Silver - January 12, 2022 4
I was looking through some old purchase inquiries today to touch base and express continued interest in acquiring specific domain names. One such name...