Monte Cahn Back in the Domain Auction Business

I received a press release from NamesCon and domain name consulting firm RightOfTheDot, LLC announcing that there will be a live domain auction at the NamesCon conference. From my perspective, the most interesting aspect of this news is that it means Monte Cahn, founder of Moniker and its popular domain auctions, is back in the business of domain conference domain name auctions.

Bucking the tradition of a domain conference hosting a live domain name auction, NamesCon did not have an auction during its inaugural event in January. Yesterday, conference organizer Richard Lau cited the experience of Monte Cahn and Mike Berkens with domain auctions in announcing the news. According to Lau, “We were initially reluctant to offer a domain auction, but the 15 years of domain auction experience, strength, reputation, and relationships that ROTD presented convinced us that their auction will contribute to the distinct and diverse activities and sessions that NamesCon is known and respected for.”

While at Moniker, Monte played host to some of the most exceptional domain auction results, including the TRAFFIC auction that famously sold $12.4 million worth of domain names. Since that auction in 2007, the domain space has changed quite a bit. Subsequent auctions produced much more modest results, and I think conference organizers have been less focused on the domain auctions, which were once considered the most anticipated aspect of conferences.

I think Monte and his team became known for hosting exciting domain name auctions. In addition to the buzz generated with large sales, there seemed to be more excitement in the room. I can recall many times when Monte  was  standing on the stage whooping up the crowd. I presume he will bring this back and hire auctioneers who will liven up the auction floor.

This is not the first domain auction Monte will have presided over since his Moniker days. During the Summer, ROTD oversaw the successful .Global auction in London that saw 35 .Global domain names sell for $63,780. This will be the first domain conference auction for Monte though.

I reached out to Monte to ask a few questions to learn about the upcoming auction and his expectations for it. He was kind enough to respond, and his answers are below.

END_OF_DOCUMENT_TOKEN_TO_BE_REPLACED

Domain Conference Panel I Would Attend

When I am at a domain conference, I don’t generally attend the panels or keynote speeches. I go to conferences like TRAFFIC and Namescon to reconnect with friends and colleagues, meet with industry companies, and make new contacts. I very rarely attend the panels. There is one panel I would attend though: a Q/A with UDRP panelists.

A UDRP is a risk for any domain owner. Regardless of how defensible a domain name is (check out the Photo.com UDRP for an example), there aren’t really any domain names that are immune to a UDRP filing. I think a UDRP on a descriptive domain name should be a “no brainer,” but there are quite a few examples of a UDRP being ruled in favor of a complainant, despite the domain name’s descriptive nature. Even when the correct decision is made, I think there are many UDRP decisions that are inconsistent. I suppose it is the nature of the system.

That being said, I would find it

END_OF_DOCUMENT_TOKEN_TO_BE_REPLACED

I just received a press release from Escrow.com announcing that the company has acquired the Agreed.com escrow service from Thought Convergence. Agreed was granted its escrow license from the California Department of Business Oversight in October 2012, and the escrow service was introduced during NamesCon. Terms of the acquisition have not been released given that both companies are closely held.

Although this news was surprising to me, it was somewhat less surprising given the recent news of Thought Convergence’s sale of Aftermarket.com to Igloo. It made sense for Thought Convergence to operate an escrow service that worked closely with its domain resale marketplace, but after the sale of Aftermarket.com, it probably didn’t fit within the company’s ecosystem.

This acquisition allows Escrow.com to acquire the updated technology and platform that Agreed uses, which should benefit customers as well as the company. For the time being, Agreed.com will forward to Escrow.com, and the Agreed technology will be integrated with Escrow.com’s technology.

The press release announcing the news is published below:

END_OF_DOCUMENT_TOKEN_TO_BE_REPLACED

About this time last year, NamesCon 2014 was a napkin idea. In 90 days we put together a conference with 7 keynote speakers, 25 panels and over 100 panelists that won accolades from every corner of the internet naming space. Hearing that people did more business in their first day of NamesCon than during entire conferences elsewhere was not unusual. And the generosity of attendees came shining through at the record-breaking WaterNight to benefit WaterSchool’s clean water projects.

NamesCon was founded on the idea that a rising tide raises all boats.  We will all win by having everyone involved with internet naming in the same venue at the same time annually. When you think NamesCon, you know: “Vegas, January, Must Go.”

END_OF_DOCUMENT_TOKEN_TO_BE_REPLACED 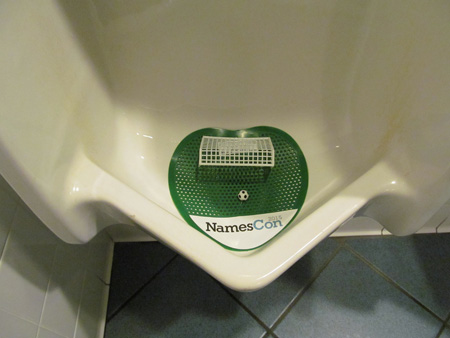 The Domainers Choice Awards were held last weekend in Dana Point, California, and I wasn’t able to make it because of a wedding in New York. I was checking out some of the event photos, and I want to share a photo that Bill Hartzer posted on Flickr.

As you can see, NamesCon had a creative marketing tactic in the men’s restroom. Because of the World Cup that is taking place in Brazil, NamesCon outfitted the urinals with a mini soccer ball and goal,  and I suppose the objective of the urinal soccer game is pretty obvious. The “grass” was branded with the NamesCon logo.

I think this is a great attention grabber, and it’s also nice to see NamesCon sponsor a domain industry event.

Do You Want to Attend NamesCon Next Year?

There are two groups of people in the domain industry – those who attended NamesCon this past week in Las Vegas, and those who did not attend for whatever reason.

Obviously those who attended the conference have formed their opinions about the value of attending because they experienced it first hand. Those who weren’t able to attend have to rely on a variety of industry reports from the conference, including one that I shared. Other reports I recommend reading including Ron Jackson’s analysis, Morgan Linton’s article, Donna Mahony’s recap, and Theo’s post. I assume Mike Berkens