To give you an idea of how this compares to other parking companies, here are the approximate number of domain names that resolve to their DNS according to DomainTools (rounded up):

There are other parking companies, although I don’t know the DNS off the top of my head. Keep in mind, some of the numbers above may not be totally accurate as people may use their own DNS and some type of forwarding.

Nevertheless, it’s a pretty good illustration of how much of an impact Internet Traffic has had in such a short period of time.

I read an article discussing Aerin  Lauder’s aspirations of building a successful fashion empire similar to that of Tori Burch’s company. Of course, I was most interested in speculating how the granddaughter of the legendary EstÃ©e Lauder  would potentially market her brand online.

A couple of quick historical whois searches likely produced the answer. Aerin.com is currently owned by Aerin, LLC on Fifth Avenue in New York City. While I could go and search business records for the state of New York to see who owns this LLC, I think a historical Whois search may be even more accurate, since it’s possible that a manager would be listed on the LLC instead of Lauder.

A historical whois search from January 2011 shows the name has been registered to a person with the same email address as the current registrant, but the physical address was listed as 767 Fifth Avenue Suite 4200. This physical address happens to be the same as the Ronald S. Lauder Foundation, and of course, Ron Lauder is Aerin’s father.

Even more interesting to me is the provenance of the domain name. In 2010, the domain name was owned by Frank Schilling’s Name Administration. Whoever bought it likely paid a handsome sum for the domain name. According to the NY Post, Aerin Lauder is the third largest shareholder in the billion dollar company founded by her grandmother.

Although Aerin.com doesn’t currently resolve, it would seem likely that the domain name will be used by Lauder, and it could become home to the next fashion empire. 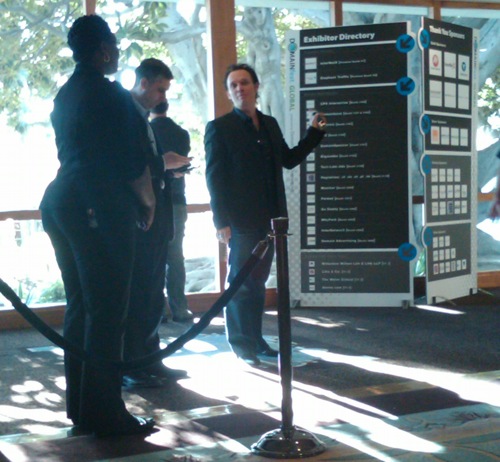 File this under funny things that you don’t see every day.

As you can see in the photo above, Frank didn’t have his badge and wasn’t allowed entry into the afternoon panel at DomainFest. Oversee.net CEO Jeff Kupietsky tried unsuccessfully to vouch for Frank despite showing the security guard his business card and proclaiming, “I’m paying for this event!”

After a few minutes of negotiating with the security guard, a staff member passed by and vouched for Frank.

It’s very frustrating to see a generic / descriptive domain name taken away from a registrant via UDRP.  Not only is it unfair, but it also adds to the cost of doing business, as a UDRP defense has become a risk that needs to be factored into any domain investor’s business model.

Back in late 2008, Balglow  Finance, a Brazilian company operating a sunglasses business known as “Chilli Beans,”  filed a UDRP for the descriptive domain name, ChilliBeans.com. The domain name  was/is owned by Frank Schilling’s company,  Name Administration, Inc. When the three person NAF panel ruled against Name Administration in November of 2008, the company filed a lawsuit in its Grand Cayman jurisdiction in order to keep the domain name.

I was just informed that Name Administration has prevailed in its nearly two year legal effort to keep this domain name. According to a release I received this afternoon, the companies agreed that  “NAI’s use of the generic Chillibeans.com domain name violated no enforceable rights of Balglow Finance.”

Name Administration has agreed to transfer the domain name to Balglow for an undisclosed settlement. According to Schilling,  “while it’s unfortunate that this dispute necessitated a trip to the Cayman Court, we are most pleased to have resolved the matter in such a mutually beneficial way.”

As a result of owning such a stellar domain portfolio of generic/descriptive domain names, Name Administration has been a frequent target of UDRP filings. Some companies wrongly believe they have more rights to domain names than his company, although they are most often proven wrong by UDRP panels. When I spoke with Frank, he discussed his company’s history with UDRP filings.

“We’re never looking to pick fights over IP rights and have really tried hard to do the right things in the domain name business, for a very very long time, but we’ve won 17 UDRPs.   That should say a lot.  Large companies often want what you have and don’t want to pay for it.   They try to vilify you for making money with generic domain names, and the UDRP has created an unholy intimation that holding a generic name for profit is somehow bad.   Well it isn’t!   Everybody owns something –  and when people challenge our generic IP rights we will spend whatever it takes to make our point that anyone is free to register a generic name on a first-come first served basis.”

It’s good to see Name Administration prevail in this dispute. I hope other companies realize that filing a UDRP for a descriptive domain name may seem like a cost effective option at first blush, but it can lead to a costly and drawn out legal battle if they mess with the wrong company.

I bet that there are plenty of people who read my blog that are very excited for today’s World Cup Final featuring the Netherlands and Spain. Since I am a betting person, I will put it out there that I think Holland is going to win the game. Without a doubt, this is going to be a fun game to watch.

On to a few updates:

Hope my American friends are having a nice Fourth of July holiday weekend and that if you live elsewhere you are also enjoying your weekend. Stay safe and enjoy the weekend!   Here are a few updates from the domain business as well as my company.

Elliot Silver - August 12, 2020 0
I saw a job opportunity posted on LinkedIn that might be of interest to a domain industry professional. Tucows is looking to hire someone...

Elliot Silver - August 11, 2020 5
Former Vice President and current Democratic candidate for US President Joe Biden has selected US Senator Kamala Harris to be his running mate: I have...

Elliot Silver - August 11, 2020 3
NamesCon is going to look much, much different this year. Not only is the event being held exclusively online, but it is also being...

Elliot Silver - August 10, 2020 11
It looks like someone is getting creative with a politically charged domain name. If you were to type in FuckTrump.com, you will end up...

I Don’t Respond to Unqualified Prospects

Elliot Silver - August 10, 2020 7
When you have an inquiry or make offer form on your undeveloped but valuable domain names, you likely receive a substantial number of inquiries...