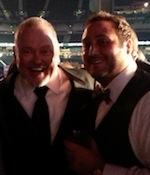 Over his 6+ year tenure with the company, Nima serviced over 600 client accounts and consulted with more than 18,000 customers. He also consulted Go Daddy’s executive leadership team on the startup scene and their social marketing strategy.

I know of several people who work with Nima, and his presence will be missed. Although Brad Larson has been my Account Executive for many years, I have always found Nima to be knowledgable and helpful in Brad’s absence.

I spoke with Nima about his leaving the company, and he said he left on good terms. “I want to express my sincere gratitude to Go Daddy, colleagues, domain industry and clients (friends). It was an amazing ride & I’m humbled by it,” he told me.

Although Nima didn’t say what he has planned next, I imagine he’ll be doing something big in the start up scene. Nima’s a class act, and I hope our paths cross in the future.

If you want to stay connected with Nima, you can keep in touch with him via twitter @DomainAdvisor  and on his personal blog, Nima.CO.

Elliot Silver - November 29, 2022 45
For the past few years, Swetha Yenugula has regularly and frequently shared her .XYZ domain name sales. The value of her sales coupled with...