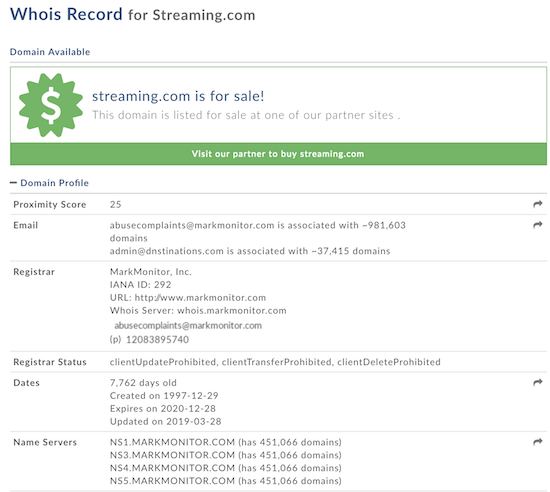 The streaming battle is on! It looks like Amazon acquired the Streaming.com and Streaming.net domain names within the last few days. Streaming.com and Streaming.net both forward to PrimeVideo.com, a landing page directing people to click through to Amazon.com. Both of these domain names are now registered to DNStination Inc., the Whois privacy proxy service for MarkMonitor. Because of Whois privacy, it is not possible to independently confirm that Amazon acquired the domain names, but that seems to be the case.

Prior to the change of registrant to DNStination Inc., Streaming.com and Streaming.net were registered to Contrib, a company led by domain investor and industry veteran Chad Folkening. It appears the domain names had been listed for sale, but I do not see an asking price. Several years ago, Streaming.com was being brokered by Mark Daniel of Domain Holdings. Incidentally, Chad Folkening was a Co-Founder of Domain Holdings. I reached out to Chad via email to see if he can comment on the sale price, and if he can, I will provide an update.

Lately, it seems like Google, Amazon, Apple, Microsoft, Verizon, NetFlix, and other tech companies are all working on various streaming services for television, video, music, gaming, and more. When it comes to streaming and domain names, it looks like Google and Amazon are in the lead.

Credit for noticing this first goes to Jamie Zoch, who shared the news on Twitter. I saw that Streaming.net changed registrants to DNStination, Inc. in my morning Registrant Alert email from DomainTools, but it did not include Streaming.com:

Streaming(.)com & Streaming(.)net have both been acquired by a currently unknown MarkMonitor client from past owner Chad Folkening of Contrib. Google? Amazon? Apple? Buyers? #streaming #premium #domain

“Meh” Domain Names Are The Toughest to Acquire

Commanders.com Was a Smart Acquisition

Elliot Silver - May 25, 2022 1
When I win a domain name at NameJet, it usually ends up in a Network Solutions account I control. I don't keep many domain...

Elliot Silver - May 24, 2022 1
NameJet sent out an email to auction customers this morning announcing they can sign up for SMS/Text Messaging alerts for auctions. Customers will be...

Elliot Silver - May 24, 2022 1
Domain investing is a capital intensive business. No matter how much money you have or have access to, you can spend it all acquiring...

Elliot Silver - May 23, 2022 24
The domain investment community is relatively small and most of the main participants know each other. There's a collegial feel among many of us...

Elliot Silver - May 20, 2022 1
A company called SmartyStreets has rebranded itself as Smarty. Smartly, Smarty was able to acquire the brand match Smarty.com domain name in advance of...