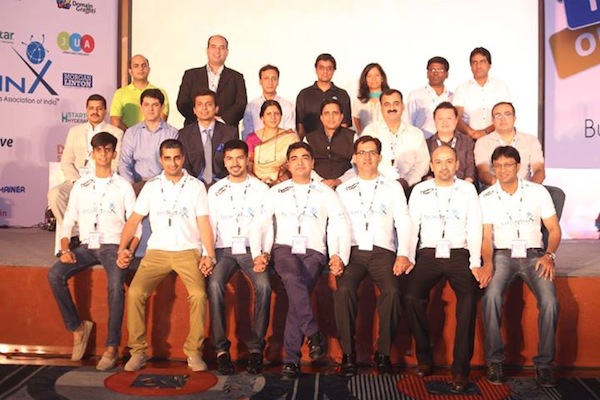 DOMAINX was a success from day one going by the registration data, more so when 400+ people turned up on 7th September by 9.00 am and 90% of them stayed back till the end of the conference at 6.00 pm.

People started coming in by 9.00 am and an hour later it was full house which was a surprise, it being a Sunday and also in the middle of a huge Indian religious festival, Ganesh Utsav.

This was followed by the Virtual Keynote Address by Michael Castello along with Ron Jackson. Michael spoke at length about the Past, Present and Future of the domain industry and also shared his vision about the future of the Ngtld’s. He also shared some more info on the sale of Whisky.com

Ron interviewed Michael throughout the talk and also shared some of the common mistakes Domainers make, the ones he made and how to avoid the pitfalls.
Ron also shared data about domain sales and how the industry has evolved over time. Ron concluded by mentioning that he would stand by for interviewing Adam Dicker after my physical keynote.

I presented the physical keynote and shared some of the experiences I had during my journey, from the time I started, the mistakes I made and how not to repeat those mistakes, again. I also shared some real life experiences and sales data and concluded by mentioning that being ethical is the most important part of this industry, this being a small tightly knight community. I also cautioned them against taking short-cuts by which not only would they ruin their own business but also the business of other upcoming domainers, by their actions.

Ron was back with interviewing Adam Dicker after my keynote and Adam shared the need to have multiple revenue streams and how he utilizes the same to have multiple cash flows. After the session it was time to say good bye to Ron and Adam as it was almost 3.00 am for Ron and Adam. In passing Ron mentioned that it was his first time since his 20’s, staying up this late â˜º

This was followed by a huge spread of tasty and sumptuous Lunch.

Post lunch the audience were treated to a very informative session by Pavan Duggal, eminent Supreme Court Lawyer, Cyber Law expert and also a member of WIPO Panel of Neutrals. Pavan Duggal delighted the audience with his in depth knowledge of the UDRP and INUDRP proceedings and cleared many a doubts members of the audience had.

The informative session was followed by another equally knowledgeable legal panel consisting of Pavan Duggal, Rodney D. Ryder and Harini Narayanswamy, all noted legal experts in UDRP and INUDRP. Panel members shared their views and insights on the two process and discussed some past cases too. Ankur Raheja, co-organizer of the DOMAINX Conference moderated the panel.

The session was followed with a virtual session by Karen J. Bernstein who also shared her knowledge about the UDRP process and some of the do’s and don’ts, followed by some examples.

Next session was with Kartik Taneja (Head – Channel Sales and Premier SMB Partnerships at Google India), an equally interesting session where Kartik spoke about the future technologies Google is working on, trying to integrate these technologies in the day to day life of the common man. This was followed by a series of short video commentaries on the technologies being worked upon.

Post Kartik’s session Edmon Chung, CEO dot Asia Organization, gave a presentation on the re-branding of the .Asia extension and how his organization was working towards re-launching and re-branding the extension in the Indian market with a renewed focused approach.

Next in line was Ritvik Mishra (member of the Cabinet Secretariat, Union Govt. of India) who was there to represent the government’s view. Being highly impressed by the proceedings of the day Ritvik suggested that domainers should be present in policy making framework groups so that their interests and concerns are taken care of. He also promised to look into some of the issues faced by domainers in India.

Coming towards the end of the program the second last session of the day was with Sai Pola, a well known domainer from India, along with his VC partner Mahendra Rao. I was the moderator and interviewer and asked them on their journey so far, their success stories and methodology of domain investments. Sai Pola informed the audience that they have started a new $5 million fund with VC money and are actively looking at buying names for the fund portfolio.

The last session of the day was the music launch of Email.biz followed by a cultural show. Music was launched by Anshul Goyal, CEO of Email.biz, and also the largest portfolio owner of .BIZ names.

During the entire day audience members were treated with small breaks via cultural and comedy shows which kept them on their chairs and helped break the monotony, as the day moved on. Audience members were also treated with free Red Bull drinks and prizes from VeriSign, for asking questions to the various panel members. There were goody bags and discounts coupons from GoDaddy and other the sponsors.

The day came to an end for a hugely successful conference with 90% of the audience staying till the end of the conference, that too on a Sunday.

At the end of the day it was established that there is a huge demand for content like this in India and since International conferences might not be for everyone, local content based conferences have a huge scope to fill this gap and create a niche market for themselves.

The conference organizers Manmeet P. Singh, Ankur Raheja, Sibtain Zaheer, Nishak Yadav and other silent soldiers delivered a power packed conference and spared no expenses to make it a mega success, that to without charging a single dime to the attendees of the conference. No mean achievement considering the turnout for the conference.

I look forward to attending the next DOMAINX conference and I am sure some of the International guests will be able to attend the same, in person, hopefully the visa problem getting settled by then.

Nordic Domain Days Coming Up in May

Elliot Silver - November 29, 2022 102
For the past few years, Swetha Yenugula has regularly and frequently shared her .XYZ domain name sales. The value of her sales coupled with...