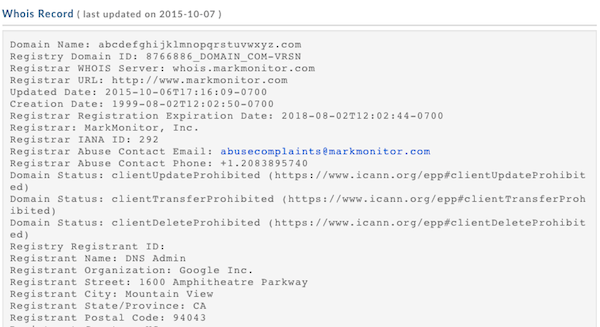 Shortly after it was announced that Google would launch its new brand Alphabet on ABC.xyz, there was a run on alphabet related and .xyz domain names. Judging by a recent Whois change, it looks like Google recently acquired abcdefghijklmnopqrstuvwxyz.com (the full alphabet). As you can see in the screenshot above, the domain name was originally created back in 1999.

Since it was apparently a private sale, I doubt we will know what Google paid to acquire the domain name, although one can assume it cost more to buy after the news of Alphabet was released. I don’t know if this domain name was important for the company to acquire, but it does not seem like they are going to get Alphabet.com from BMW, and it seems pretty unlikely ABC will sell them ABC.com either.

I did a random search of other domain names that have parts of the alphabet, and most seem to be registered. I also checked the full alphabet in other extensions, and it looks like many of those are registered as well. Several of the main extensions (like .net, .org, .info…etc.) were registered prior to the Google news about Alphabet. I didn’t notice any that were registered to Google, although I admittedly didn’t spend much time looking.

Thank you to Franky T. for sharing.