Home 5 With... 5 with… Tony Kanakaris, SocialDomainers.com 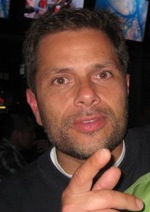 I am frequently asked if attending a domain conference is worth the expense and time off from work. I have always said yes, and I want to share a good example of why I think so. Tony Kanakaris is a fellow New Yorker, and despite both of us being members of DNForum and sending a couple business messages in the past, we never had the opportunity to get to know each other. Earlier this year at DomainFest, we were able to get to know each other better, and now we talk business all the time.

Tony was born in Queens and attended St. John’s University, where he played Division IIA college hockey. He was previously a Financial Advisor with Morgan Stanley, and he got into domain investing in 2007. He is an expert web developer, although he primarily works on his own projects, including SocialDomainers.com, a social networking website for domain investors to meet and learn about upcoming conferences, tradeshows, and regional get togethers.

Some of Tony’s future projects include FlipThis.com, CanYouBuyMeThat.com, and GlenCove.com, a domain name I know took him a while to acquire. I interviewed Tony to learn more about SocialDomainers.com, and I hope you’ll check it out when you have a chance.

ES: What are your plans for SocialDomainers.com, and what are your objectives with regards to the site?

TK: The thinking behind the creation of SocialDomainers.com was to create a centralized online location for where domainers can get together and create local events, groups etc. as a means to network locally offline with domainers in their area.   A few years back (Oct. 2007) I had created a thread on DnForum.com where I was looking to meetup with local domainers near me to discuss ideas, domains, etc…I was relatively new to the domaining scene and just wanted to be able to meet local domainers face to face and just chat.

As soon as I created that thread (the 1st of its kind)…i soon started to see many other threads start popping up in DNForum regarding local domainer get-togethers…. in California, Philly, Chicago, Florida, Romania, China…etc….basically all over the world….so I thought to myself…why not create a site that would cater to just this….a place where domainers can post events, create groups..etc…as a means to locally get together with other domainers near them.

So..that was basically the initial plan…to create this Facebook type social platform for domainers…..additionally i am also using SocialDomainers.com as a place to advertise all the domain conferences that take place across the world…we have also added an area where you can list domains for sale…latest domainer news, a chat functionality, and an IM functionality located at bottom toolbar of site.

ES: Ron Jackson had an article discussing the history of domain   conferences. What are your thoughts on current domain conferences?

TK: My thoughts on the current domain conferences is that there are just too many…all that seems to change is the location… each conference seems to offer the same content….the same people…etc…and the cost starts to become a factor….not everyone can afford to attend every show… hence the low number of attendees…hence the creation of my site to make it easier
and affordable   for domainers to get together.

ES: Do you prefer large conferences or smaller, more localized gatherings, and why?

TK: I like both…large conferences to get to meet with a larger group of people with whom you don’t get the chance to meet too often…and smaller local gatherings to be able to meet more often and discuss ideas openly.

ES: What do you see as the future for domain investor social gatherings?

TK: I see a smaller amount of conferences taking place in the future with more content/substance to them…..

ES: Will SocialDomainers.com be planning any events or conferences in the     future, and if you could create a conference anywhere in the world,     where would it be and what would be its theme?

TK: At the moment we would be more interested in sponsoring events/conferences as a means to further build out our brand….there are currently enough domain conferences out there……..if we could create a conference anywhere in the world…it would have to be Athens, Greece….where the birthplace of civilization took place…:)

5 with Jen Sale, Co-Founder of Evergreen