Sold on Pheenix for $6k+, UDRP Filed Against FIFA.net (Updated) 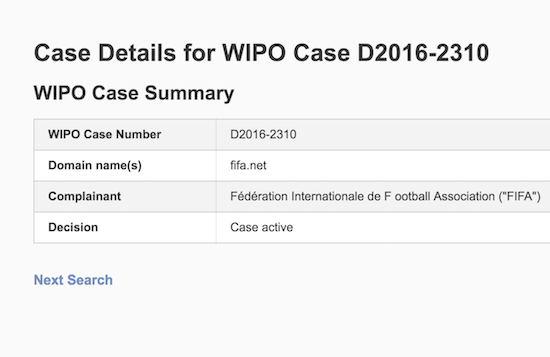 A UDRP was filed against the FIFA.net domain name at the World Intellectual Property Organization (WIPO). The UDRP is WIPO Case D2016-2310.

When I saw the UDRP filing, I did a quick search to see how old the domain name is. I was a bit surprised to see a creation date of 2014. Because the domain registrar is Pheenix, I assumed the domain name had been auctioned at the expired domain name auction house. An article on TLDInvestors.com confirms this, and it shows that FIFA.net sold on July 30, 2014 for $6,030.

If you are a fan of soccer (or football / futbol outside of the United States), you likely thought of the sport’s governing body when you saw FIFA in the domain name. That was my first thought anyway. The UDRP complaint was, in fact, filed by FÃ©dÃ©ration Internationale de Football Association (“FIFA”). Perhaps interestingly, prior to its expiration and auction in 2014, the domain name was owned by a registrant in South Korea, and I don’t see a connection with it and the soccer/football governing body.

FIFA owns and uses FIFA.com for its website. Based on a historical Whois search at DomainTools, it looks like FIFA might also own FIFA.org, although the domain name is privately registered and it does not resolve to a live website at this time. Back in 2010, FIFA filed a UDRP against FIFA.tv, and it was the prevailing party. FIFA.tv currently forwards to FIFA.com.

I will keep an eye on this UDRP.

Thanks to Jag Singh for finding an archive of the sale.

Update: According to UDRPSearch.com, the UDRP went in favor of the complainant.