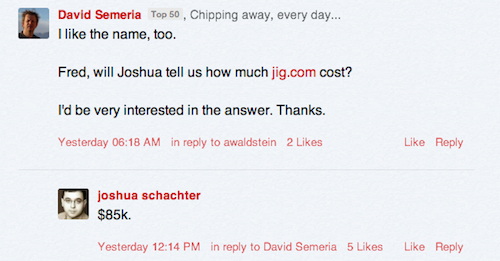 I think Merlin Kauffman is one of the most likeable guys in the domain industry. He attends just about all of the tradeshows and events, and I don’t recall ever seeing him without a big grin on his face. Merlin is a young guy, and his company has amassed a portfolio of great generic domain names.

This morning, I read an article on TechCrunch about a startup called Jig, which operates on Jig.com. The startup, was founded by Joshua Schacter, who also founded Delicious. It was incubated in Schacter’s Tasty Labs, which received a  reported $3 million in funding in November of 2010.

In doing some research, it appears that Merlin Kauffman’s company, True Magic, LLC, owned Jig.com as late as April of 2011. In May, the domain name was acquired by Tasty Labs, although the sale does not seem to have been publicly reported at the time.

In addition to the TechCrunch article, noted venture capitalist Fred Wilson of Union Square Ventures, one of the companies that funded Tasty Labs, wrote an article on his blog about Jig.com to help introduce the startup. In the comment section, someone asked what the price of the domain name was, and Schacter replied “$85k.”

I reached out to Merlin for a comment and will post it when I hear back. He travels extensively and I am away in California right now, so it might not get updated very quickly (same as comment approval).

Thanks to Larry Erlich for the tip.