Home GoDaddy Josh Fowke Was The Broker of Voice.com

In June of this year, Voice.com sold for $30 million. It is the largest publicly reported domain name sale of all time. When the deal was announced in a press release now found on the SEC website, MicroStrategy mentioned that the deal was brokered by GoDaddy. This was confirmed by GoDaddy Aftermarket VP Paul Nicks. I am now able to report who actually brokered the domain name at GoDaddy.

Something caught my eye on Twitter earlier this morning. After clicking around a bit, I ended up on the Twitter page of Josh Fowke. Within his profile, Josh shared that he was the broker of the Voice.com domain name sale: 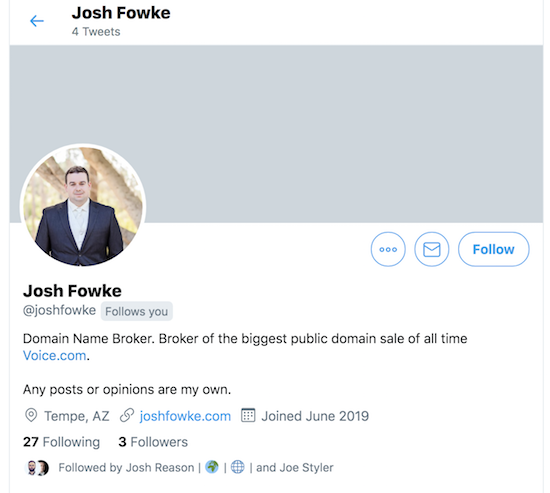 I haven’t worked with Josh before, but it looks like he has worked at GoDaddy for quite some time. According to his LinkedIn profile, Josh started working at GoDaddy in November of 2009. He became a broker at GoDaddy in 2018. My guess is that Josh works on GoDaddy’s Domain Broker Service, which works with clients to acquire domain names on their behalf.

Congratulations to Josh on being the broker with the largest domain name sale of all time.

Elliot Silver - December 6, 2022 3
I've always wondered what tools domain investors may have created to help them with their domain investing businesses. I think people who operate and...