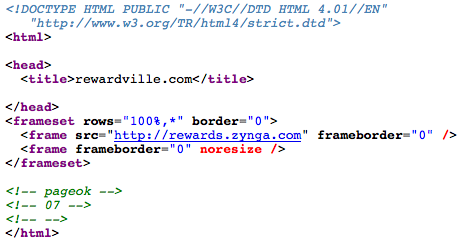 According to the latest domain sales report put together weekly by Ron Jackson over at DNJournal, Rewardville.com was sold last week on Sedo for $4,500.

If you visit the current Rewardville.com website, it forwards to a subdomain on Zynga.com. Zynga is the company behind popular social games such as Farmville, Cityville, Frontierville, Petville, and many other games (some of which don’t have the “-ville” moniker.

Although the website is not resolving, when I visit Rewardville.com, I get an error message that says “The webpage at  http://rewards.zynga.com/ might be temporarily down or it may have moved permanently to a new web address.” To me, that looks like the domain name is being forwarded to this Zynga subdomain, which does not appear to be resolving.

I am unsure if this is related, but there was  an article on TechCrunch at the end of November about American Express and Zynga teaming up. According to the article, “American Express is now allowing its customers to exchange their ‘membership rewards’ points for virtual goods and/or ‘game cards’ that can be redeemed for Zynga’s in-game currency.” Perhaps Rewardville.com will be used in relationship to this special partnership.

The domain name is currently privately registered, so there is no confirmation yet that Rewardville.com was actually acquired by Zynga. However, it would be strange for another entity to forward this newly acquired domain name to the Zynga website.

Thanks to David Bleaman for the tip.