It looks like the NHL’s Chicago Blackhawks hockey team has filed a UDRP at the World Intellectual Property Organization to try and seize control of the Blackhawks.com domain name. The UDRP filing is WIPO Case D2018-2064. The complainant is listed as Chicago Blackhawk Hockey Team, Inc. 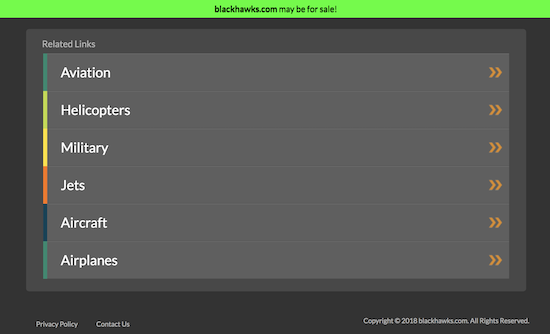 The message at the top of the domain name landing page indicates it may be for sale, but the inquiry form does not have a price. I looked through my email records, and I do not see any emails from broker newsletters offering BlackHawks.com for sale at any time.

It looks like the NHL hockey team promotes ChicagoBlackhawks.com for its url, although that domain name forwards to NHL.com/blackhawks. The NHL’s Chicago Blackhawks team was founded in 1926. The team’s domain name was created in June of 1997.

In my opinion, the “blackhawks” or “black hawks” term seems pretty generic. A “Black Hawk,” is a type of hawk as described on Audobon.org, so “black hawks” would be the plural of this bird. A Black Hawk is also a type of military helicopter, as can be seen on the Lockheed Martin website. When referred to on the news in plural, they are known collectively as “Black Hawks.”

It will be interesting to learn more about this UDRP when a decision is rendered. I am curious to know if the NHL team tried to buy the domain name first and if the UDRP filing is their “Plan B” attempt to secure the domain name. The NHL team will need to prove the owner registered and is using the domain name in bad faith. Considering none of the links are related to the Chicago Blackhawks team, it could be an uphill battle.

Elliot Silver - November 29, 2022 67
For the past few years, Swetha Yenugula has regularly and frequently shared her .XYZ domain name sales. The value of her sales coupled with...