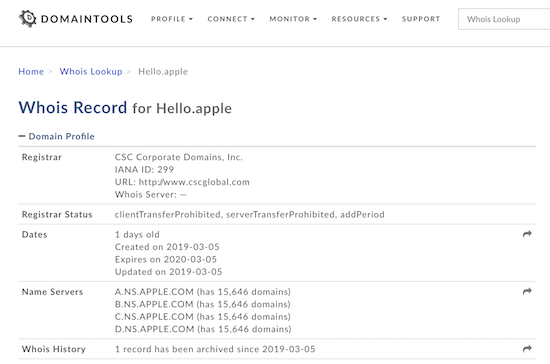 Apple is the operator of the .Apple new gTLD extension. I noticed an interesting domain name registration earlier this morning, courtesy of my DomainTools registrant monitor tool: Apple registered Hello.Apple. This might not seem like big news, but I think it is notable considering nTLDStats.com reports there are only 5 .Apple domain names currently registered.

At the present time, Hello.Apple does not resolve to an active website or any sort of landing page. When I visited, in fact, I was taken to an ISP error page rather than anything on Apple’s website. The domain name does have Apple nameservers set up, so it looks like the company plans to use it at some point.

All three of these Google-indexed domain names forward to a page within Apple’s Apple.com website rather than being used for a standalone website.

Should Apple use Hello.Apple in a marketing campaign, it could provide a boost to the visibility of the new gTLD program. Google uses its .Google somewhat regularly, and I think that has exposed more people to the new extensions and shown people that Google is okay with using the new domain names.

As you may know already, the simple word “Hello” is meaningful in Apple’s past and present . The company has said “hello” many times, including on its devices when they are turned on for the first time. Hello even played a major role in its iPhone Super Bowl commercial in 2007. Put simply, “Hello” is more than a word at Apple, and it is very interesting to see the company register this Hello.Apple domain name.

I would guess Apple plans to use Hello.Apple at some point in the near future. I can’t imagine the company registered it without a reason. I will keep an eye on it to see what comes of Hello.Apple.