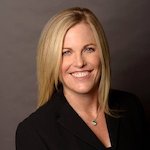 Over the weekend, I saw that Andee Hill announced that she has left Donuts. Andee worked there for two years as Director of Business Development at Donuts. Prior to Donuts, Andee founded (and sold) an escrow service and got her start in the domain business at Escrow.com.

Of her time at Donuts, Andee said she is “Honored to have worked at a smart company and with smart people.” Her last day at the company was July 31.

After reading the news about her departure from Donuts, I reached out to Andee to see if she is staying in the domain name industry and ask what her plans are. Andee told me she has accepted an offer from ICANN to become its Registrar Services & Engagement Programs Director.

“I’m very excited to start the position and feel very lucky to have had the opportunity to work with the brilliant people at the Bakery and to now be accepted into the group at ICANN, Andee told me.

Andee will take on this role in ICANN’s Los Angeles office on August 16th.

I wish Andee all the best in her new position at ICANN.