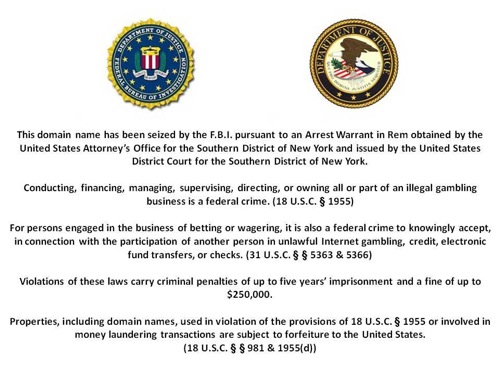 The US Attorney’s Office in New York City issued a press release this afternoon announcing charges for the founders of three major online poker companies: PokerStars, Full Tilt Poker, and Absolute Poker. There are some serious charges in the indictment, and this could be a game changing moment for companies in the online poker business.

According to the press release, the government seized five domain names, although it did not mention the domain names that were seized. Generally, there is a clear message posted on the website indicating the seizure, which you can see in the graphic above.

Based on the message that currently appears on UltimateBet.com and also on UB.com, it appears that these domain name were two of the names seized, although the Whois information does not reflect that yet. According to a page on Wikipedia, Absolute Poker and Ultimate Bet are owned by the same company, Cereus Poker Network.

It appears that the websites for Full Tilt Poker, Absolute Poker, and PokerStars are still operational right now, although I don’t have a list of domain names that these companies use for their businesses.

This could be a game changer, since these are all major websites, and I don’t recall seizures of domain names for major poker companies like this. One of the most interesting things to follow will be learning how company clients will get their millions of dollars in deposits refunded.

Thanks to Alexander Ripps at GamblingCompliance.com for the tip.

Elliot Silver - July 6, 2022 1
FTX is a leading cryptocurrency exchange that owns FTX.com but operates in the US on FTX.us. The Economist published an article about FTX Founder...

Elliot Silver - July 5, 2022 1
We took a trip out to Nantucket this weekend to see some friends and enjoy one of our favorite places to visit. I brought...