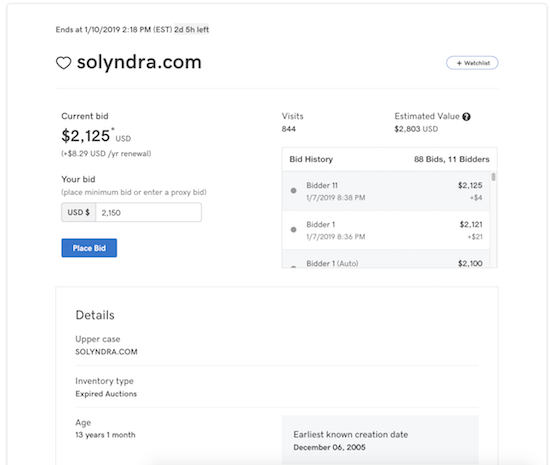 It looks like the Solyndra.com domain name expired, and it is currently in auction at GoDaddy Auctions. Solyndra was a solar panel maker that filed for bankruptcy after receiving a very large loan from the US government. Solyndra became a political buzzword during President Barack Obama’s presidency, and people still reference Solyndra today in political discussions.

There are a number of reasons of why this domain name will likely sell for a substantial amount of money, despite the status of the company that previously owned it. There are many inbound links to the Solyndra.com domain name, giving it some SEO value. These links may have more value because many come from trusted news sources. The domain name could also be used by a political operative, perhaps highlighting the history of the company, it’s downfall, and the government’s involvement.

Archive.org has several records of how Solyndra.com looked over the years.

I will be interested in seeing how the domain name is used by the winner of the auction.