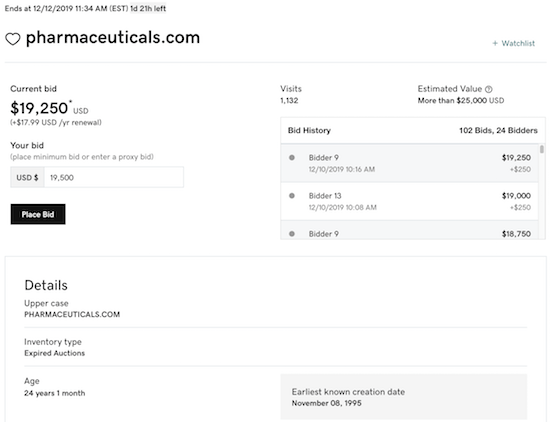 In 2015, Pharmaceuticals.com was reportedly sold for $50,000 via Flippa. The sale was reported by TheDomains.com and other domain investment publications. Despite being acquired for $50,000, the Pharmaceuticals.com domain name is in expiry status at GoDaddy, and it is currently up for auction at GoDaddy Auctions. With just under two days remaining in the auction, there have been 102 bids from 24 different bidders, and the high bid stands at $19,250.

It appears that the domain name had been owned by a company called Bioclinica. The Whois record indicates this, as does a recent view of the domain name archived at Archive.org in February of this year. Based on some cursory research I did this morning, I don’t see a reason for why the company let this domain name expire. If the company no longer considered this an important asset, I am surprised it did not renew the domain name and sell it privately, since there was likely considerable domain investor interest (to say the least).

GoDaddy’s appraisal tool says the estimated value of Pharmaceuticals.com is “More than $25,000 USD.” Although it is five syllables and a bit difficult to spell, I think it’s quite valuable. The pharmaceutical business in the US alone is quite massive, and there are a number of ways this domain name may be used by a buyer.

Because Pharmaceuticals.com expired more than 30 days ago at GoDaddy, I do not believe it can be renewed by the former registrant any longer. This means the domain name should end up in the hands of the highest bidder at the conclusion of the auction.