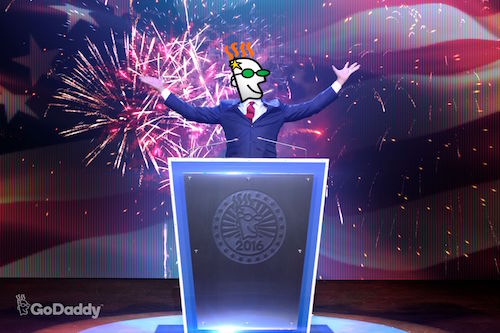 GoDaddy became a household brand by having risque television advertisements shown during the Super Bowl. Recently, the company halted its famous Super Bowl commercial campaigns, focusing on other marketing efforts instead.

I just read a news release announcing that  GoDaddy  will be advertising during the US Presidential election debates. It is very possible that the debates will draw an even larger US-based audience than the Super Bowl. Obviously, the television spot doesn’t include anything too risque and offers a special price for registering a .com domain name.

According to the news release, “GoDaddy is putting its own twist on political platform satire to encourage all people to believe in their own, individual ideas while passionately pursuing their American dream online.”

The first television spot was uploaded to YouTube this morning, and I embedded it below. I believe the company will be rolling out additional television ads for the subsequent debates and throughout the remainder of the election season.

Interestingly, the television advertisement campaign is co-sponsored by Verisign, and it promotes .com domain names as you might expect.