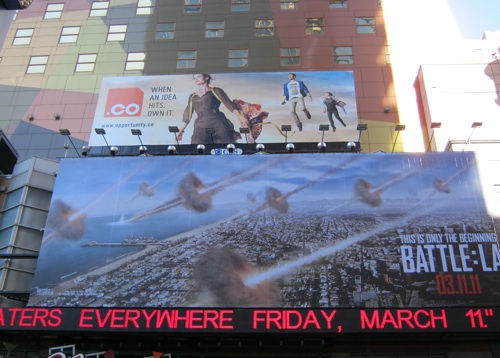 As you are well aware by now, the .CO Registry has been spending a lot of money to ensure that people know about .CO domain names. The Super Bowl commercial cost about $3,000,000, not including production and endorsement costs.

I was in Times Square in New York City today, and I took some photos of the new .CO billboard, likely seen by tens of thousands of commuters and tourists every day. Anyone traveling up 8th Avenue can see the billboard, which is located on the north side of the street at 42nd and 8th. It’s one of the most  noticeable  billboards to anyone leaving the Port Authority Bus Terminal and several large subway stations.

The concept of the campaign is neat: being able to take your “lightbulb,” inspirational moments and turn them into domain registrations. Oftentimes, people have great ideas and try to register the .com, only to find the domain name already registered. With .CO, there are many more available, and the .CO makes more sense than a .net or .org.

I’ve been told there are other .CO billboards in New York City, including two in SoHo – on  Broom St. & Lafayette and on Great Jones & Bowery. Billboards are also visible in US tech hubs like Austin, Texas and San Francisco. The full outdoor campaign includes billboards, bus shelters, and other interesting outdoor signage in New York City, San Antonio and San Francisco. It coincides with other marketing efforts that are ongoing.

Kudos to the marketing team at the .CO Registry and the Pappas Group. I am pretty sure this is the largest marketing effort by a registry, and it’s likely the first Times Square billboard campaign by a registry as well. 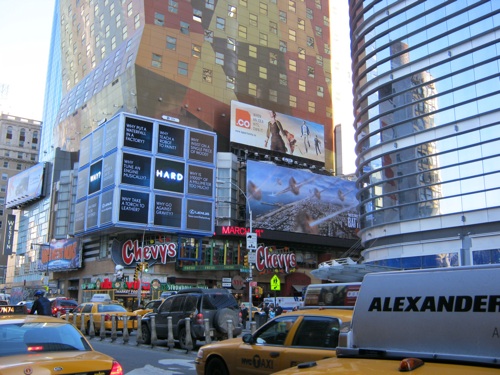