Domain Name from Company With $215m+ in Funding in Auction 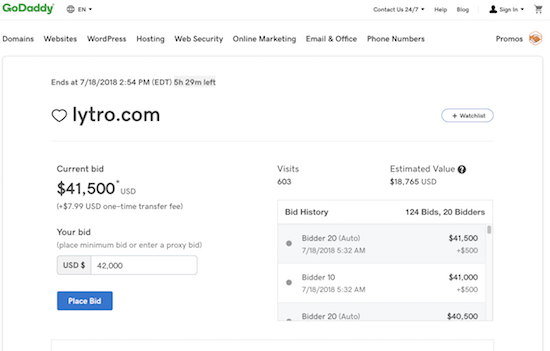 A big auction on GoDaddy Auctions caught my attention this morning. Lytro.com, which GoDaddy appraises at $18,765, is in auction with a high bid of $41,500. There are 20 bidders who have participated so far. It appears the domain name expired, based on the “Renew Now” message seen at the top of the landing page filled with pay per click advertising:

From my perspective, Lytro.com as a domain name doesn’t have a whole lot of meaning that I can see, so I was curious about what could be causing the substantial interest in the domain name.

Apparently, Lytro was a well-funded company at one point. Crunchbase reports the total funding for the company at $215.8 million. According to a 2015 Business Insider article discussing a pivot, “Lytro has raised $140 million since its 2011 founding from investors including Allen & Company, GSV Capital, Danhua Capital, K9 Ventures, Greylock Partners, North Bridge Growth Equity & Venture Partners, New Enterprise Associates, and Andreessen Horowitz.”

Despite its substantial funding, it would appear that things did not work out well for the company, according to a March article published on PCMag.com. “Lytro, the photography startup best known for its “shoot first, focus later” camera, has announced it is shutting down,” it was reported in the article. That article referenced a TechCrunch report of a rumored acquisition by Google, but I am not sure if that happened. An article published on The Verge offered additional details about the company.

Whatever the case is, it looks like the domain name is now in auction.

The auction for Lytro.com ends just before 3pm Eastern today, unless last minute bidding extends the close of the auction. Because the domain name is registered at Name.com rather than at GoDaddy, I am not sure how much additional time is given for someone to renew the domain name prior to its provisioning.