Panels Should Consider RDNH Even if Not Requested

Not surprisingly, the sole UDRP panelist, Terry F. Peppard, ruled in favor of McAfee even though the company did not respond to the UDRP. While the decision was on point, I think the panelist should have taken it upon himself to rule that the filing was a case of Reverse Domain Name Hijacking (RDNH). It does not appear that RDNH was even considered by the panelist.

END_OF_DOCUMENT_TOKEN_TO_BE_REPLACED

When a company has a huge portfolio of domain names like HugeDomains, it is bound to see its fair share of UDRP filings. A pair of Spanish companies called Bookker Corporate S.L.U and The Graffter SL filed a UDRP against Bookker.com, a domain name owned by HugeDomains. The UDRP was filed at the World Intellectual Property Organization (WIPO).

HugeDomains, which was represented by attorney Jason Schaeffer of Esqwire.com, prevailed in the UDRP. The panel also ruled that this was Reverse Domain Name Hijacking (RDNH). This UDRP decision is worth highlighting because of the pro-domain investor language from the three member panel (Assen Alexiev, Alejandro Touriño, and Jeffrey Neuman).

END_OF_DOCUMENT_TOKEN_TO_BE_REPLACED

A UDRP was recently filed against the high value Skill.com domain name at the World Intellectual Property Organization. Skill.com is a fully developed business, and the complainant in the UDRP is a company called Skillful Communications, Inc. You don’t often see such a valuable domain name become the target of a UDRP proceeding.

John Berryhill is a highly respected Intellectual Property attorney who has made a name for himself in the domain name industry. John has successfully defended many valuable domain names over the years, and he is one of the most knowledgeable attorneys when it comes to domain name law.

END_OF_DOCUMENT_TOKEN_TO_BE_REPLACED 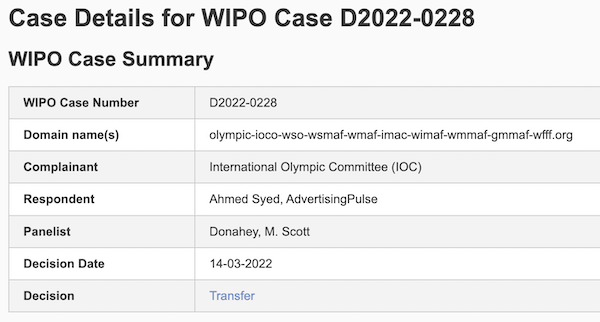 The International Olympic Committee (IOC) is a somewhat frequent UDRP filer. The organization, which manages the Olympic Games, has filed dozens of UDRP proceedings, according to UDRPSearch.com. I took a quick look at the domain names that were subject of these UDRP filings, and none of them are as huge as the one that was just won.

The IOC filed a UDRP at the World Intellectual Property Organization (WIPO) for the olympic-ioco-wso-wsmaf-wmaf-imac-wimaf-wmmaf-gmmaf-wfff.org domain name. The decision was just published, and not surprisingly, the IOC prevailed in the dispute and will become the new registrant of this 55 character .org domain name.

END_OF_DOCUMENT_TOKEN_TO_BE_REPLACED

AOGA.com UDRP is a Toughie

Alaska Oil and Gas Association filed a UDRP against the AOGA.com domain name, and the organization prevailed. In reading the decision, I can see both sides of the case and think it’s a tough situation. I think it was probably the right call, but I think the rationale for the decision was bad.

Alaska Oil and Gas Association previously owned AOGA.com. According to the decision, the complainant reportedly had the domain name stolen from its account at Network Solutions:

Making matters worse, the domain name was apparently sold to someone else on NameJet. According to NameBio, AOGA.com was sold $1,193 on NameJet in December of 2020. I did not participate in the auction, but I looked at historical Whois records on DomainTools and it does not appear that this domain name was ever in expired status.

Yes, the complainant most likely had the domain name stolen from its account but the current registrant bought a 4 letter acronym domain name at auction without knowing it was stolen.

This makes things a bit murky, particularly because it’s a fairly generic domain name and the complainant organization is Alaska Oil and Gas Association and not a company called Aoga.

One big issue I have with the decision is where the panelist highlights the discrepancy between the purchase price and the registrant’s asking price as if it should matter:

END_OF_DOCUMENT_TOKEN_TO_BE_REPLACED

A UDRP was filed against the domain investor-owned IndoorBillboard.com domain name at the National Arbitration Forum (NAF). The decision was published today, and the domain registrant prevailed and will retain this generic domain name. The three member panel discussed Reverse Domain Name Hijacking (RDNH), and it ruled this was an abusive filing. The domain registrant was represented by Jason Schaeffer of ESQWire.com.

The complainant in this filing is a company called Indoor Billboard/Northwest, Inc. It argued that it has a trademark for the “indoor billboard” term and that it “received notoriety” for the term. The panel felt that the complainant did not offer up any evidence to that effect: