Why is Shawnee.com Listed for Auction on NameJet?

I spend quite a bit of time on NameJet searching for upcoming domain name auctions and participating in auctions. Overall, I have a pretty decent experience using the platform, save for the occasional delayed delivery or non-delivery of domain names. There was also the time NameJet was auctioning a domain name I owned without my permission, but that was apparently an issue of human error.

Yesterday evening, I noticed that Shawnee.com is listed as an upcoming “Expiry” auction on NameJet. When I did a bit of pre-auction research, it seemed peculiar that this domain name would be listed for an upcoming auction, and I posted about it on Twitter:

Hey, @namejet and @netsolcares, why is https://t.co/2PfK54bZmF, a domain name owned by @ShawneeComm, listed on your platform as an upcoming expiry auction? Not only doesn’t it expire until 2028, but the domain name is also registered at @GoDaddy. pic.twitter.com/3w3E4BB6hP

If you visit Shawnee.com, you can see it is being used by a company called Shawnee Communications. That is the first thing that made this listing a head scratcher. Typically, expired or expiring domain names do not resolve to an active website. A look at the current Whois record made this an even more confusing issue: 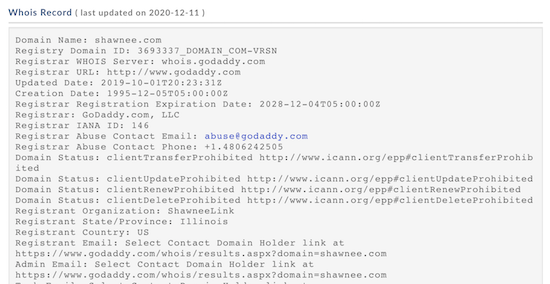 As you can see, Shawnee.com is not only registered at GoDaddy, but it is also registered through 2028. Even if it were to expire and not be renewed, the domain name would flow to GoDaddy Auctions rather than to NameJet, unless it was deleted (in which case there would be more than one drop catching service trying to snag it).

According to the Whois History Tool at DomainTools, Shawnee.com was pending transfer away from Network Solutions in September of 2019. By November of 2019, Shawnee.com was registered at GoDaddy, where it remains today. The only reason I could see it coming up for auctions is if the registrant listed it for sale, but if that were the case, it would not be listed as an “Expiry” auction.

Konstantinos of OnlineDomain.com wrote about a domain name he owned that was listed for sale via NameJet when it should not have been listed. I can’t speculate about whether or not this issue is similar or related to the current issue, but I think whatever the issue is, it needs to be fixed. At a minimum, there should be some way NameJet automatically removes Expiry auction listings when domain names are not registered at partner registrars where it doesn’t make sense that they would be auctioned.

Unless I am missing something here (which is always possible), I don’t really think this domain name is going to be in an Expiry auction on NameJet. There are 60 bidders who have this domain name on backorder right now. Had it gone through the auction process, someone might have paid and waited for their domain name to be fulfilled only to later have the auction canceled and refunded.

Assuming my read on this is correct, NameJet will likely have this auction removed. However, if there is an underlying issue here, there could be other domain names on the platform that await the same fate, and it is something NameJet should address across the platform rather than on an individual basis.