According to UDRPSearch.com, a UDRP has been filed at the National Arbitration Forum (NAF) against the Luma.com domain name. This is case #1703756, and the UDRP was commenced on November 22.

Luma.com was registered more than 20 years ago in 1995. The Whois registrant information lists a “Luma” as the owner of the domain name, and the Whois address seems to match a California company with Luma in its name. A DomainTools Whois History search dating as far back as 2001 (the oldest entry) shows the domain name had been  owned by a Luma, Inc. back in 2001 and possibly longer. At the present time, Luma.com has a Network Solutions under construction landing page: 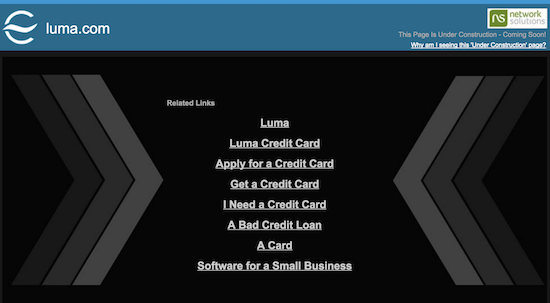 Because the UDRP was filed at NAF, I don’t believe the name of the complainant will  be revealed publicly by NAF until the UDRP decision is rendered. This means there isn’t really a way for me to publicly see who filed the UDRP complaint.

A Google search for “Luma” shows a ton of results, so that isn’t going to be helpful in seeing who filed the UDRP. There are tons of companies called Luma or who use LUMA as their initials. Some of these I quickly found via Google search include Luma Surround WiFi, Luma Partners, LUMA Institute, LUMA: Loyola University Chicago, Luma Pictures, Luma Labs, LUMA Hotel, Luma Solar, Luma Surveillance, Luma Lighting Design, and a ton of other entities that use Luma or LUMA in their names.

With a domain name dating back to 1995 as well as the generic nature and wide usage of the “Luma” term,  it would be seemingly difficult to prove all aspects of the UDRP in order to win. I will keep an eye on this UDRP  and share an update when I see a determination.

Update: UDRPSearch.com shows that this UDRP has been withdrawn.