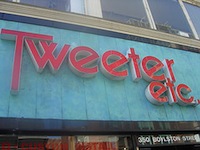 I received word this afternoon that the auction for the Tweeter.com domain name and related assets has been pushed back. The new auction date has not been set by Hilco Streambank, the company running the auction on behalf of the domain owner,  a lender to Tweeter.

According to Hilco Streambank’s David Peress, “There has been significant interest in the assets with several potential buyers expressing the need for more time. We are going to accommodate them. We’ll set a new auction date soon.”

If you aren’t aware, the Tweeter.com domain name became available as a result of the bankruptcy of a music store called Tweeter, which was founded in 1972. The company employed hundreds of people, and it operated somewhere between 50-100 stores throughout the country. Tweeter was once a very popular music chain, especially in New England (where it was founded), although its bankruptcy and closing left many customers and employees angry.

Once the company has announced the date of the auction, I will share the details.

My Favorite Kind of Sale