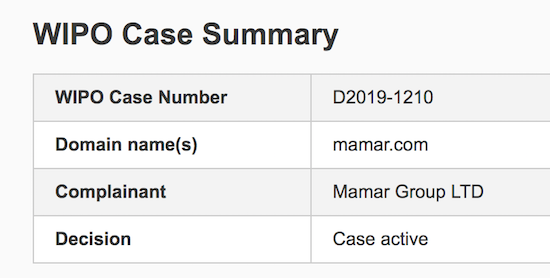 A UDRP was filed against the Mamar.com domain name at the World Intellectual Property Organization (WIPO). According to a couple of Spanish to English dictionaries I checked, the word mamar means “to suckle” – as in breastfeed. The UDRP is WIPO Case D2019-1210. The UDRP was filed by an entity called Mamar Group LTD.

Although the Whois record is currently redacted due to GDPR, it has been owned by the late Igal Lichtman’s company, Mrs. Jello, LLC for quite some time. Based on the ParkingSpa.com nameservers that have been used for many years, along with the fact that the domain name has been registered at Moniker for many years, I have no reason to believe the domain name was sold or is registered to another entity.

It’s not just that the generic term mamar essentially means “suck” in Spanish that makes this a sucky UDRP filing. I think this UDRP also sucks because of what John Berryhill pointed out on Twitter yesterday:

The Complainant’s US TM registration issued last month on a claim of first use in September 2018.

To me, this looks like it would be impossible for the complainant to be able to prove the domain name was acquired and is being used in bad faith to target the complainant. If this can’t be proven, the UDRP is supposed to fail. Put simply, I think this UDRP should be DOA.

I understand why the complainant would want the .com domain name, but the UDRP was not created as a means of acquiring a domain name that is legitimately registered to another entity. I think it really sucks that the domain registrant has to go through a UDRP defense to keep this domain name. I would not be surprised to see a finding of Reverse Domain Name Hijacking (RDNH).

Update: Complaint was denied, and the panelist ruled this was a case of Reverse Domain Name Hijacking. Stevan Lieberman was the attorney who represented the domain registrant.

Share
Email
Facebook
Twitter
Linkedin
Previous article
UDRP Filed Against ABC.net (Updated)
Next article
When Selling a Domain Name to a Startup, Ask for An Option to Invest