When I was looking through my Dropping.com email yesterday, I saw that ShellOil.com was coming up for expiry auction at NameJet. I did a historical Whois search at DomainTools, and I saw the domain name had been owned by Shell International Petroleum Company before it expired. The domain name was created back in 1997, and it looks like the company has owned it for many years.

I tweeted about the expiration, mentioning the Shell global and Shell US Twitter accounts:

Why on Earth would @Shell / @Shell_US allow the https://t.co/aaPcNrXlOp domain name to expire? Domain name was created back in 1997.

Someone replied that perhaps the company was moving away from the “oil” branding and that may be a reason for the expiration. I replied that the US Shell Twitter account nickname is “Shell Oil Company,” and even if the company was moving away from the oil branding, it wouldn’t seem to make sense to let the name drop and available for anyone to buy. Domain names are relatively cheap, and renewing a domain name like this one seems to be a no-brainer to me. Maybe it slipped through the cracks, or maybe they didn’t want it – only they would have the answer to that.

I followed the NameJet auction page as the bid deadline came up, and I was surprised that there were no backorders. Even names that appear to be obvious trademarks to me regularly get bids at expiry auctions, despite the investment risk. I then noticed something interesting – the auction had a minimum bid of $325 rather than the typical $69 minimum backorder bid. Perhaps this higher minimum bid amount dissuaded people from bidding on the domain name. 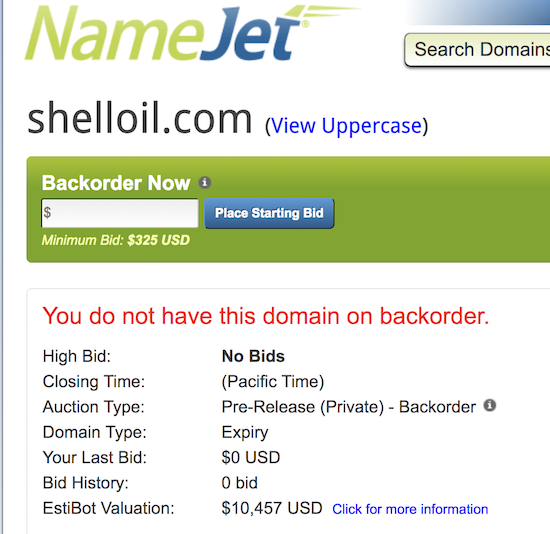 From my outside perspective, it doesn’t really make sense to me that Shell didn’t renew the domain name. It was also strange to see an expiry auction like this with a much higher than normal minimum bid. Some weirdness all around on this one.