I don’t write many non-domain name related articles, but this is going to be one of them. For the last few weeks, I’ve been spending some of my evenings either at Fenway Park or at home watching the Boston Red Sox play in the postseason. Seeing them win the World Series at Fenway Park last night was something I won’t ever forget.

I grew up a Red Sox fan. I didn’t go to many games as a kid, but I have several ticket stubs from when I went to Fenway Park. Up until this season, the most memorable game I attended was Roger Clemens’ final game as a member of the Red Sox. I went with my family, and remember a long standing ovation as he walked off the field to Elton John’s Rocket Man.

For ten years, I lived in New York City. Just about every day, I wore my Boston Red Sox cap. When I was in grad school in 2003, I ordered the Extra Innings package and watched just about every game. The loss to the Yankees in the 2003 ALCS was heartbreaking, and it was even more upsetting to watch it in a bar in the middle of Manhattan. Yankees fans were enthusiastically mocked us Red Sox fans after the Aaron Boone game winning home run.

The comeback in 2004 was thrilling. I had a ticket to game 7 of the ALCS, and when the Sox were down 3-0 to the Yankees, I vowed to sell it and donate the money to charity if they came back. They did, and I followed through. Before game 4 of the 2004 World Series, I lined up with hundreds of other Red Sox fans at a Red Sox fan favorite bar called The Riviera. As game time approached, and the likelihood of getting in grew slim, all of us in line ran to nearby neighborhood bars in the Village to watch (imagine hundreds of Red Sox fans running to non-sports bars in the East Village). Celebrating the win on the street in New York City was the icing on the cake.

When my wife and I contemplated moving to Boston, we discussed buying Red Sox season tickets. I had been on the waiting list for several years and hadn’t had the opportunity to get them. In late March of this year, I received the call I had been waiting for, and we were able to buy a partial season ticket package. We went to a bunch of games this year, and I was excited to be able to take Hailey (now 19 months old) to opening day. She enjoyed the ice cream more than the game, but that’s to be expected.

This year’s postseason run was made even more special for me because of the people I was able to take to the games. I was able to take my Mom, a lifelong Red Sox fan, to game one of the ALDS against Tampa Bay. We got to Fenway very early, and we spent time walking around and exploring. I was then able to take my Wife to the second ALDS game. I was at the first ALCS game with a friend, and that was the only postseason game I saw in person that the Red Sox lost. I bought World Series tickets, and I took my Brother to game 1, where I was also able to hang out with Go Daddy’s Alan Shiflett.

I was at Fenway Park for game 6 last night, and I was able to witness something special – the first time the Red Sox won the World Series at home since 1918. Fenway was rocking.

Several years ago, I was at the DomainFest party at the Playboy Mansion, where I met former Red Sox outfielder Coco Crisp. He had his World Series ring, and he let me try it on and take photos. That was a very cool experience. Watching the Red Sox win the World Series in person was way better, as was taking my favorite Red Sox fans to the games.

Now it’s time to get back to work! 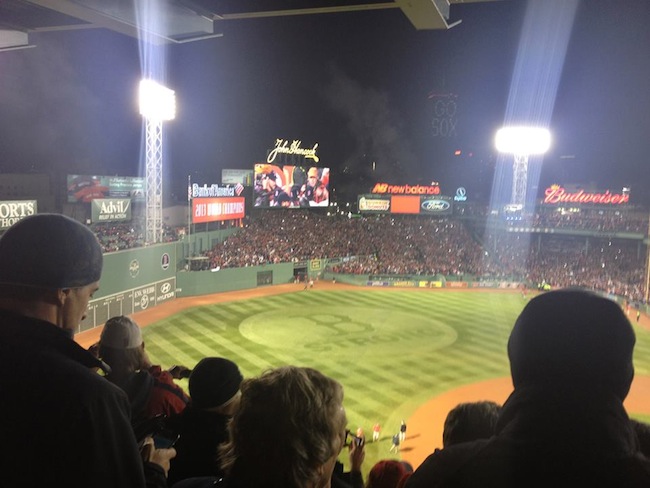