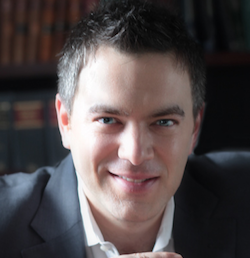 NamesCon 2017 is less than a week away! In just a few days, domain industry professionals from throughout the world will be converging on the Tropicana Hotel in Las Vegas for this year’s conference. The agenda is packed with interesting content, and tickets are still on sale for those who have waited for the final moments to make plans. NamesCon takes place from January 22-25, 2017.

This morning’s NamesCon Sponsor Spotlight interview is with domain industry (and intellectual property)  lawyer Zak Muscovitch. These interviews introduce or reacquaint industry professionals with sponsors of this year’s conference.

What is your company’s mandate; what sets you apart?

I have been assisting domain name investors with domain name disputes and transactions since I was called to the bar in 1999. I recall that back in 1999, when I said that I practiced “Internet law” and handled “domain name disputes”, I would be met with a lot of blank faces. Back then, the Internet was fairly “new” to the average person. It was also a very exciting time as everything was “new”. When a domain name dispute or transaction arose, we were basically starting from “scratch” with very little to guide us. So, I think that my relatively lengthy experience is one of the things that allows me to help clients effectively. Chances are that I have dealt with something similar or at least comparable at some point in the past, and can accordingly contribute that experience and expertise.

What’s the story behind how your company was founded?

Back in law school in 1996, I had written a paper entitled, “Taxation of Internet Commerce”, and it was subsequently picked up by a peer reviewed journal because it dealt with such new and interesting issues. That was what gave me my first taste of the exciting field of “Internet Law”. When I was called to the bar in 1999, I had wanted to practice ‘Internet Law”, but there was really no such thing, as law firms were just beginning to get into Internet law. But as it turned out, I started practicing personal injury law, and began taking on domain name dispute cases on my own. I got to take on the largest companies in the world and take on the most prominent lawyers in the world, which was pretty cool for a recent graduate. I took on a pro bono federal court case and learned how to litigate domain name disputes in court from that. I also took on UDRP cases and acted for respondents in what were the first batch of such cases to ever be heard. From there, I found a few more cases here and there, and then opened up my own firm 3 1/2 years after  graduation. It was tough at first, and I had to handle a broken leg or dog bite case to pay the bills, but I gradually gained more experience and got more clients. Now a very large part of my practice is Internet law related work, with a focus on domain name disputes and transactions.

What major milestones has your company accomplished?

I have handled some cases against some of the largest companies in the world, and believe it or not, I beat Google three different times in UDRPs. The cases involved, Goggle.com, Groovle.com, and Oogle.com. As much as I love and rely upon Google, it was fun to have been able to successfully defend cases against them.

How will your company engage attendees at the upcoming NamesCon?

I have sponsored Namescon since the first event. At the time, it was a fairly last minute thing and nobody knew for sure how it would work out. Well, it worked out great and I have sponsored ever since. I sponsor Namescon to support the show, the organizers, the domain name community, and to promote my law practice. In addition, at Namescon I will be representing the Internet Commerce Association, of which I am a Board member, at the ICA session, the ICA Dinner, and other opportunities throughout the conference.

How has (or will) NamesCon helped your company achieve its goals?

Namescon has been great to meet old friends, colleagues and clients, and to meet new people in the industry.

What are you most looking forward to at the upcoming conference?

In my business, I rarely see my clients! Even when they are in my own city, let alone across the world, we do our communications via email, telephone, and Skype. Accordingly, Namescon is my opportunity to see all the people that I have done business with during the past year. It is so nice to finally meet in person for the first time, or to see old colleagues and clients again.

Where can attendees find out more about your company, product or services while at NamesCon?

I will be at the Networking Lane on Sunday, will also be a panelist at the ICA session on “The Most Shocking UDRP Cases of 2016”, and will be at the ICA dinner. If anyone would like to get involved in the Internet Commerce Association, which is the industry’s trade and lobby group,  please let me know or sign-up on the website.

As you are entering into the main exhibit hall, you will also be able to drag your feet across my advertisements which will be large stickers stuck to the floor!