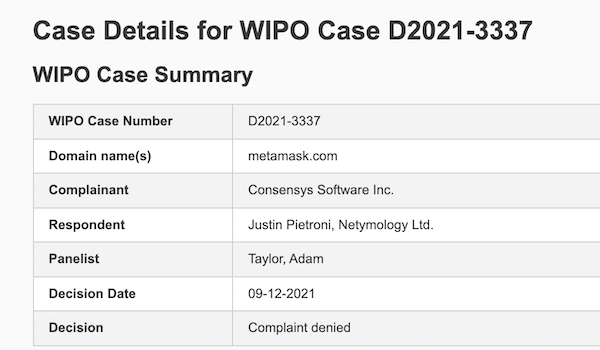 The company behind the MetaMask cryptocurrency wallet, Consensys Software Inc., filed a UDRP against the MetaMask.com domain name. The UDRP was filed at the World Intellectual Property Organization (WIPO), and it is WIPO Case D2021-3337. The decision was published today, and the sole panelist (Adam Taylor) ruled in favor of the domain registrant.

The popular MetaMask cryptocurrency wallet operates on the MetaMask.io domain name. With an abundance of scams and schemes, it is pretty obvious why Consensys Software would want to control the MetaMask.com domain name. In the factual background section of the decision, an alleged contact by the domain registrant was cited and the registrant denied he was the person who initiated contact:

“On July 20, 2021, a person using the name Alex Schleifer contacted the Complainant via its customer service channel and stated: “Hi. I own the Metamask.com domain name. I wasn’t actively looking to sell it but just received an offer from someone. Thought I’d reach out to you before I committed to selling it. I’ll hold off on selling it for a week or so. Please forward to the appropriate person.” In response to an email from the Complainant enquiring about the asking price, Mr Schleifer replied on July 23, 2021, stating: “I’ve received another interesting offer and wanted to make sure to ask you folks first. We’ve owned this domain for years and there has a been a fair amount of interest lately. He went on to moot a price of ‘6-7 figures’”.

Mr Schleifer’s attorney emailed a response on October 6, 2021, stating that Mr Schleifer did in fact own the disputed domain name and insisting that Mr Schleifer had not been involved in a phishing scheme. The attorney stated that his client took the claims seriously and asked for a call to discuss the situation. The Complainant did not respond.”

It’s been on the back of my mind that someone could really harm a domain investor by emailing a company about selling a domain name the investor owns while impersonating the investor. There would be nothing to gain for a third party to do this, but it is not something that would surprise me to see. Given the findings in this UDRP, I think it would serve as a good reference point for a future UDRP proceeding should something like this happen to someone else.

The panelist, Adam Taylor, agreed with this and ruled in favor of the domain registrant:

In addition, the panelist ruled that this was a case of Reverse Domain Name Hijacking (RDNH). Here’s why Mr. Taylor ruled the RDNH finding was warranted:

Domain Investors “Have a Duty to Research” Trademarks

Empower.com Lawsuit Appears to be Settled

Verizon on Domain Investing: “It’s Not Too Late”

Elliot Silver - January 20, 2022 1
When I think about companies that might advocate for domain name investing, Verizon is not one of the first few dozen that would pop...

Elliot Silver - January 20, 2022 0
In my opinion, it should almost automatically be considered Reverse Domain Name Hijacking (RDNH) if a complainant files a UDRP when the domain name...

Elliot Silver - January 18, 2022 1
Last Summer, a prospective buyer made an offer on one of my domain names that was too low for me to accept. I had...