If You Renew an Expired Domain Name, Check the Name Servers

A friend of mine reached out this afternoon to ask if I know who is managing the portfolio of Mrs Jello, the domain investment company founded by the late Igal Lichtman. I gave him the name of someone I thought might be helpful and asked what’s up. He mentioned that Mica.com expired and Mrs Jello should renew the domain name before it is auctioned or deleted.

I took a look at the Whois record, and I noticed the domain name is registered at Uniregistry, and it has an expiration date of March 2021. The domain name was not in expired status because if the registrar had renewed it for a year in preparation for an auction, the domain name would have already run through its full expiration cycle by now. What my friend noticed and I confirmed is the name servers are set to Uniregistry’s default name servers (NS1.EXPIRED.UNIREGISTRY-DNS.COM NS2.EXPIRED.UNIREGISTRY-DNS.COM), and as a result, the landing page indicates the domain name is in expired status: 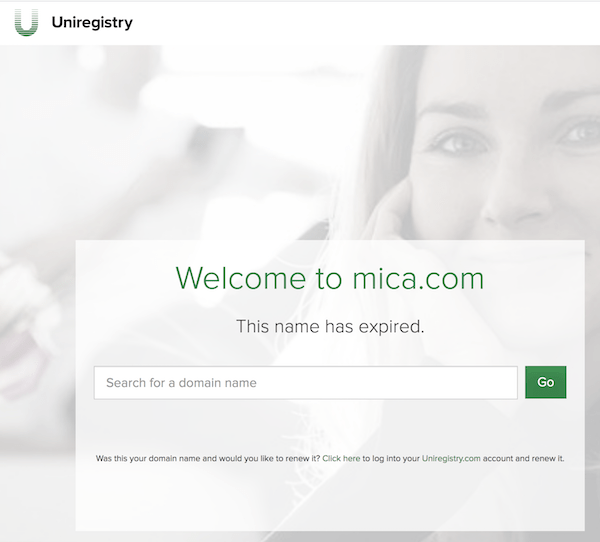 After seeing this, I recalled a tweet thread from Tasha Kidd that reported this issue. Tasha stated that domain names that were in expired status at Uniregistry did not have the name servers changed back to their original name servers once the registrant renewed the domain name(s):

@Uniregistry has lost control of their fiduciary responsibility to their #domain registrants. For MONTHS I have been trying to get them to give a **** abt their bug in not updating expired nameservers when you renew w/in the grace period. @DInvesting @thedomains I CURRENTLY have

I am pretty certain most domain registrars revert a customer’s name servers back to the original ones upon renewal. I don’t usually let my domain names expire before renewing, but I am nearly certain that is the case. For whatever reason, this does not appear to be happening at Uniregistry right now.

I do not know if this is an unfixed bug, a bug that was fixed but not applied to previously expired domain names, or if it’s a feature. Whatever the reason is, people who have domain names in expired status at Uniregistry need to make sure they check their name servers upon renewal to ensure the domain name resolves where they intend it to resolve.