I Don’t Get .Web Domain Names

Earlier this morning, Andrew Allemann broke the news that the auction for the .Web new gTLD extension “has concluded with a $135 million price.” I really don’t understand why .Web is so appealing that an entity reportedly paid 9 figures for the rights to operate the extension.

In my opinion, Internet-related terms such as “web” and “world wide web” are less widely used today than years ago. Web seems almost passé , in my opinion, although the longer term “website” is still used by pretty much everyone.

I did a Google Trends search of “web,” and the results seem to corroborate my opinion on this. Aside from a slight increase in the last couple of years, there has been a significant downward slope for “web,” as you can see from this screenshot I took: 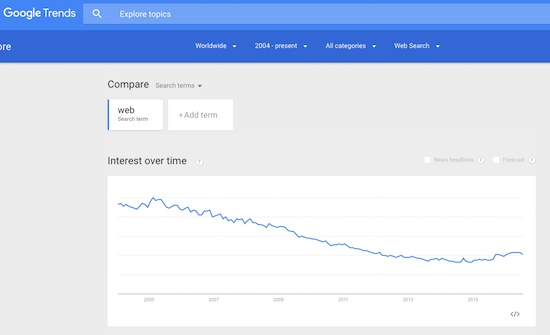 Although I am not really an investor in the new extensions, I can see why companies and people would use them. If you’re a local lawyer who doesn’t want to pay for a .com in the aftermarket, perhaps buying a less expensive .lawyer or .attorney domain name makes sense. The same goes for other professions. With .web, I don’t see that same type of affinity.

As Andrew Allemann pointed out in his article, “Neustar paid about $100 million to acquire the .co top level domain name, which already had over 1.5 million registrations.” According to nTLDStats.com, there are only three new gTLD extensions that have 1 million + registered domain names: .XYZ, .Top, and .Wang. From what I understand, many of these domain names were registered at very, very low prices (ie .XYZ domain names being sold for a penny).  I don’t recall the .CO registry offering very low prices on registrations, and I can’t recall any major discounting on .CO domain name renewals.

After reading about the .Web auction result, I don’t understand how a company is going to be able to sell enough domain names to make its 9 figure investment back.