A UDRP was filed against the HOUZ.com domain name at the National Arbitration Forum (NAF). The UDRP case # is  1739475, and it can be tracked via UDRPSearch.com.

Because the UDRP was filed at NAF, the name of the complainant is not known at this time and will not be made public until the UDRP is decided. My guess is that the UDRP may have been filed by Houzz, the home improvement and home fashions website. According to the Houzz LinkedIn profile page, the company was founded in 2009. Again, this is just a guess since there are a few other possibilities (including HOUZ International B.V., Drink Houz, Houz AS, ART HOUZ, and quite a few other entities that use “Houz” in their branding).

HOUZ.com was created back in 2003. The oldest historical Whois entry at DomainTools I can see is from 2007, and it is owned by a Las Vegas-based entity with the last name Doumanian. The current registrant has the same last name as the registrant from 2007, so I would not be surprised if the domain name has been owned by the same or a related entity since then. It is also quite possible that the domain name was owned by this same entity since 2003 because I can’t see any records from prior to 2007.

Right now, HOUZ.com is parked with pay per click advertising links at Sedo. The domain name is also listed for sale at Sedo and has a $50,000 minimum offer requirement. According to the listing page, there have been 8 bids made to try and buy this domain name since it was listed on Sedo. 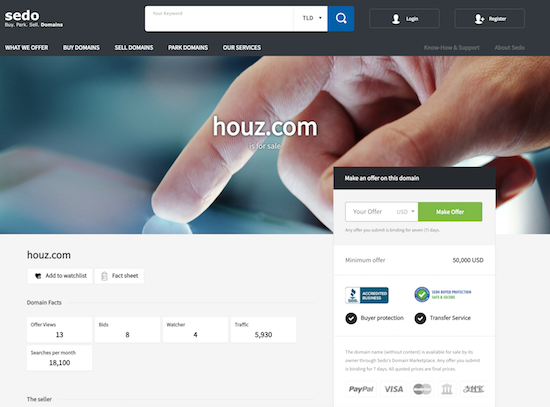 If the HOUZ.com domain name is owned by the same entity since 2007 or prior, it would not have been possible for the registrant to register it in bad faith if Houzz is the complainant since Houzz was founded after this domain name was already registered. With RBF seemingly out of the question thanks to the ICA, I don’t see how the complainant would prevail if it is Houzz. Importantly, I don’t know if Houzz is the complainant, nor do I know for certain that the same registrant has owned the domain name for many years. These important details will be revealed when the decision is rendered and published.

Update: It was Houzz that filed the UDRP. The decision was just published, and the complaint was denied. The domain owner will retain the domain name. A finding of RDNH was not made by the panelist. The domain owner represented himself in this UDRP response.