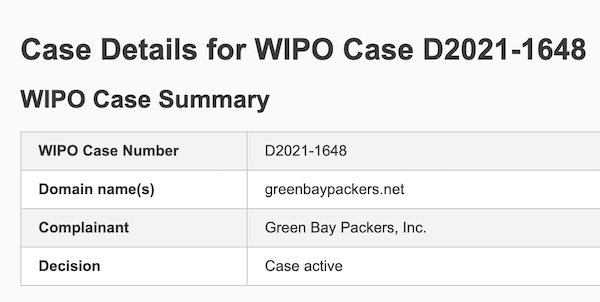 The National Football League’s Green Bay Packers paid $1,500 to file a UDRP against the brand match GreenBayPackers.net domain name. The UDRP was filed at the World Intellectual Property Organization, and it is WIPO Case D2021-1648.

This domain name, which is registered under Whois privacy, was created less than a year ago. In looking at the Whois history records of this domain name at DomainTools, I can see this is not the first time GreenBayPackers.net was registered. In fact, it appears to have been registered several times, by different registrants, since at least 2003.

If you were to visit GreenBayPackers.net to see how the domain name is being used, you will be forwarded to DonaldJTrump.com, the website owned by former US President Donald Trump. It is unclear how long the domain name has been forwarding to this website, but a screenshot from October of 2020 shows that is was forwarding since at least that point of time.

It is unclear whether the NFL’s Packers opted to file the UDRP because of the way the domain name is being used or if the team simply wanted to protect its brand after all this time. This is not the first time the Packers filed a UDRP. The Packers previously filed and won a UDRP for Titletown.com. That domain name is now being used as a website for Titletown, “a new community development just west of Lambeau Field in Green Bay, Wis.”