I tuned in to the New York Yankees game on Thursday night, just in time to see Derek Jeter drive in the go ahead runs against Baltimore. I continued watching, and I couldn’t help but root for Jeter when he came to bat with the game on the line in the 9th. As a Red Sox fan, this feeling surprised me because I have rooted against Jeter and the Yankees for so many years.

As I watched various shots of Jeter during the game, it made me think back to all of the times I watched him play. There were countless times Jeter came up with a clutch play against my Red Sox. Although many people criticize Jeter’s fielding, I was at the game in 2004 when he went crashing into the stands after making a great  catch. In that game, I remember Manny Ramirez hit a go-ahead home run in extra innings, only to see the Yankees come back with two in the bottom of the inning to win the game. I  attend quite a few Red sox games every year, and that game is still one of the most memorable to me.

The Red Sox and Yankees rivalry transcends the game of baseball to me. I grew up in the Boston area, and I moved to Manhattan  for graduate school in 2002, right when the rivalry heated up again. For 10 years, I wore various Red Sox caps on a daily basis, and I endured some cheers and boos along the way. While in NYC, the Red Sox were a  connection with home, and Derek Jeter was my team’s nemesis.

It turns out that my introduction to Derek Jeter came in the mid-1990s. When my grandparents lived in South Florida, my parents took us to the NY Yankees spring training facility. It was there that I met Yankee legends Frank Howard and Whitey Ford. I also met pitcher Jim Abbott and a young Derek Jeter. While at home, I tweeted about the meeting, and Jim Abbott replied, informing  me that the year was most likely 1994, which was prior to Jeter’s  MLB debut in 1995.

I have photographs from that day, and I still have the autograph (in poor shape under the glass on my  childhood desk).

Although I have been rooting against Derek Jeter for many years, I will be tipping my cap to him today as he retires after the game tonight. I have a tremendous amount of respect for him, and he made the Red Sox Yankees rivalry more exciting. 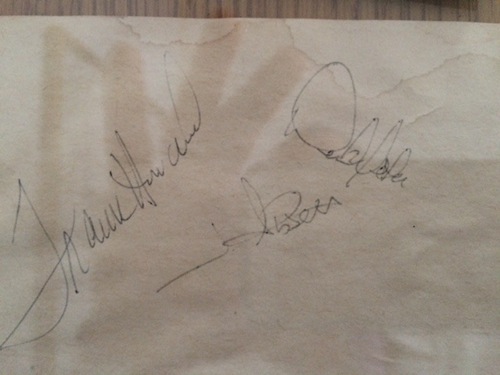