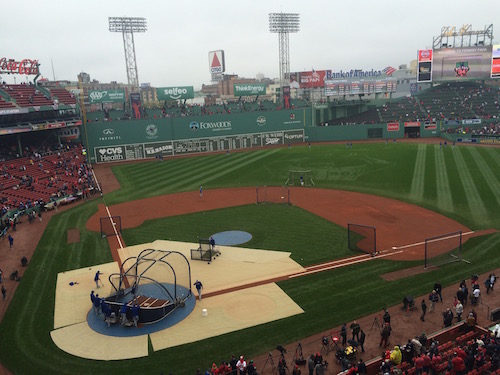 If you follow my Twitter account, you probably noticed I am a Red Sox fan. I would bet almost half of my photos are from various Red Sox games.

When I lived in New York City, I wore my Red Sox hat all the time. I survived because I was smart enough to not make any smartass comments to the wrong people and I wasn’t really much of a trash talker! 2003 was a killer, but 2004 and 2007 were great times to be in the City.

Now that we live in the Boston suburbs, my wife and I have a weekend season ticket package. We have great seats in the front row of the right field roof boxes, and it almost always makes me happy sitting in Fenway Park to watch the Sox. With the kids, we don’t get to Fenway Park to watch the Sox play as often as I would like. I think I went to something like 8 games this season, including opening day and the last game of the season yesterday.

If you are going to be at Fenway Park for any playoff games, let me know if you want to grab a beer before the game. In 2013, I went to almost every playoff game, including a World Series game with my brother and GoDaddy’s Alan Shiflett. As a Red Sox fan,  there’s nothing better than watching playoff baseball as the fall chill begins to set in… especially when the Yankees are already eliminated!

With the MLB playoffs starting this week, I am curious who your favorite team is.