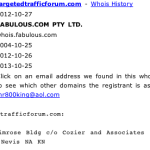 Several years ago, Rick Schwartz ran a popular private domain forum called  Targeted Traffic Forum. For years, it was one of the “go to” spots for good discussions with professionals who were successful in the business of domain investing. In 2008, for a variety of reasons, Rick shut down the forum.

For some reason,  TargetedTrafficForum.com looks like it’s a Japanese website that doesn’t appear to be related to domain names at all.

According to the Whois record, the domain name was created in January of this year. It is currently registered under privacy at Japanese domain registrar, Onamae. Ordinarily, I would have assumed the domain name expired and was picked up by someone else, although I don’t think that’s the case.

I am surprised that it now appears to be owned by someone other than Rick Schwartz. If Rick deleted the domain name, I find that strange since there were backlinks and history, and it could have been forwarded to the TRAFFIC website.

What’s up with this domain name?