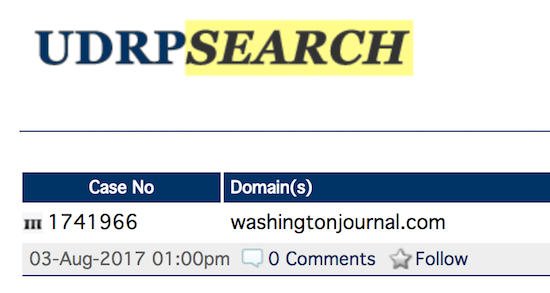 In May, I wrote about Mike Mann’s sale of WashingtonJournal.com for $75,000. It was notable because Mike had reportedly acquired the domain name for just $350, and the ROI was outstanding.

According to UDRPSearch.com, a UDRP was just filed against WashingtonJournal.com. The UDRP was filed at the National Arbitration Forum (NAF), and it is case #1741966. Because the UDRP was filed at NAF, the complainant in the UDRP is not known and will not be reported until the decision is rendered.

It looks like WashingtonJournal.com is already being used by whomever bought the domain name. According to the “About Us” page, “Washington Journal is a news and commentary website dedicated to providing our readers the most accurate, concise, and breaking political news of the day.”

The “Washington Journal” branding seems fairly generic to me. I will track the UDRP on UDRPSearch.com and provide an update when a decision is rendered.

Update: The complainant won the UDRP, as discussed by Andrew Allemann of DNW. The actual decision can be found here. As someone speculated in the comment section, the complainant in this UDRP was CSPAN.