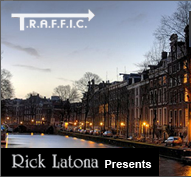 When I first heard about the TRAFFIC ccTLD conference in Amsterdam, it was shortly after Rick Latona worked out an agreement with Rick Schwartz to operate the show. My first thought was that I needed to be there, but my second thought was that I am not a ccTLD investor, so it wouldn’t be smart to spend the money to attend. I am glad I went along with my first gut instinct because the conference turned out to be fantastic.

Prior to attending, I did research on the ccTLD market, read about issues concerning ownership of these types of domain names, signed up for ccTLDs.com (domain forum) and I learned about some of the big investors and companies in this space. Previously, I really knew nothing about the industry, so I stayed away, which was not the smartest move. I will be the first to admit that I am a US-centric domain investor, and this had partially prevented me from exploring other areas of growth in the domain space, including the ccTLD market.

One of my goals of the conference was to attend as many panels as possible. Unlike some conferences, all panels started on time, and all of them were relevant to the industry (and to a new investor). It was neat to learn about the upcoming .cm landrush, and as always, a panel with John Berryhill is enlightening and filled with humor. The development panel was also very interesting because it didn’t solely relate to ccTLDs. The great thing about the conference’s panels was that I was able to learn something from just about everyone, which is a bit unusual for me.

Networking is the primary reason I attend domain conferences, and this show was no exception. Rick Latona and company had several great events organized where attendees were able to meet and network. There were three standout networking sessions, all of which took place over dinner and/or drinks.

The first networking event I was able to attend was dinner and cocktails at the West India House, home to one of the first companies ever established. Drinks in the courtyard gave me the chance to meet with several people with whom I had been communicating for months and years in one case. My wife and I were able to learn about what others in the space are currently doing as well as get to know a few people on a more personal level. The music was low key, and the buffet dinner that followed was fantastic. We were able to walk around the house and eat in a variety of rooms and settings, which was neat.

The second dinner was arguably better, and the dynamic was unique to the show. We ate at one of the more famous restaurants in Amsterdam, Restaurant d’Vijff Vlieghen, a huge restaurant that is made up of many smaller themed rooms, each with a small restaurant feel. When we arrived at the restaurant, we were randomly assigned rooms for dinner (as well as handed champagne and kir royales. This was neat because we were located in a smallish room with about 15 people, and we were able to enjoy a great 5 course meal in a smaller setting.

The final networking event was fun and decadent, as we were bused to Parked.com CEO Sig Solares’ loft, a couple of miles from the conference hotel. We were treated to a sexy performance with good music, great drinks and a happy atmosphere. Everyone’s spirits were high, and it was great to be able to network and chat in a relaxed atmosphere. Incidentally, that party might have cost me a lot of money, because my wife and I decided that we can’t miss Domainer Mardi Gras next year.

There were some fun moments at the auction as well, despite the fact that I didn’t win Cams.cm or Vegas.cm as I had hoped. DiamondRings.com sold for close to $227,ooo US and a number of other great generic domain names sold for pretty large amounts. In total, the live auction did close to $600,000 US, and I believe the Extended Auction could bring the total over $1,000,000 US in sales, a very strong figure for a growing market.

I am so happy that I was able to attend the conference, and I found it to be one of the most well-run shows I’ve attended. In fact, I complimented Ray Neu about how smooth and seamless things were operating, and he said something to the effect of, “what do you expect, it’s a TRAFFIC show.” I know these shows don’t come together on their own, so it’s a big credit to Rick Latona and his team (as well as Howard and Barbara Neu) for working long hours before and during the show to make this such a success. They really made a great impression and I can’t wait until their next conference!

Nordic Domain Days Coming Up in May