On Sunday, I asked you what you think the sale price will be for the ShipYourEnemiesGlitter.com auction held on Flippa. The majority of people who voted thought the domain name would sell for under $100,000.

The auction concluded this evening, and it looks like those people were correct. ShipYourEnemiesGlitter.com sold for $85,000 on Flippa using a buy it now option that was added to the auction. In total, there were 344 bids placed on the auction, prior to the BIN price being chosen.

Interestingly, buy it now (BIN) prices were added to the listing as the auction was coming to its conclusion. I noticed the BIN option when a $100,000 purchase price was added, then it was reduced to $90,000, and then someone bought it for $85,000. I didn’t know this was an option at Flippa, and perhaps it helped net the seller more for the auction because it had been at $75,600 with 2 minutes remaining. Keep in mind that other bids may have driven the price higher in the final seconds, so we will never know.

There are two ways to look at the sale price for this auction.

The first way is that it was a solid sale price for a business that was just launched on a totally new domain name. The other way to look at it is that it was a very low price considering all the publicity the business and auction received.

The idea behind the business is fairly replicable, as you can see by the copycat sale listings. In addition, it could prove to be difficult to earn a ROI in a reasonable amount of time for a viral business that may have already seen its “15 minutes of fame.” There seem to be plenty of orders in the queue, so perhaps it’s a short time away from earning the investment back.

Whatever the case may be, we shall see if the idea sticks and the business takes off, or if the fad dies down. Whatever happens, I am sure Flippa was pleased with all of the publicity. Hopefully, for the sake of the marketplace, the buyer will pay quickly and the deal will close without a hitch. 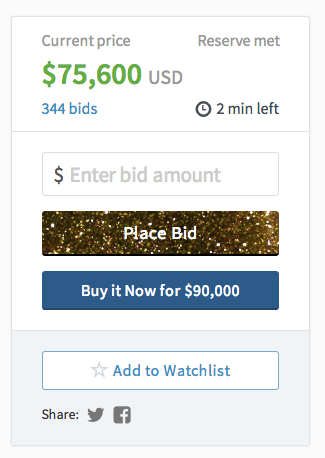 ROTD to Host Auction for Domain Names and NFTs