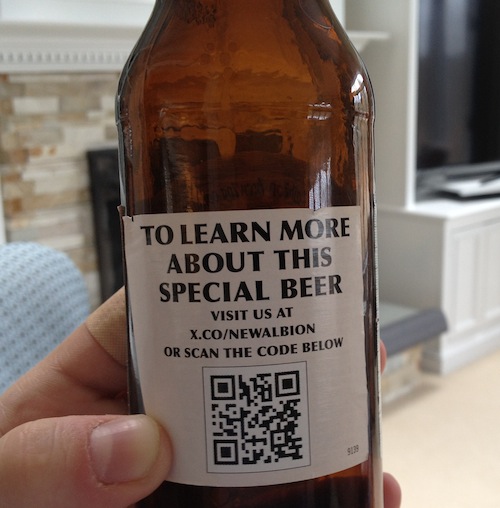 I frequently see references to Go Daddy’s X.CO url shortener in various articles and elsewhere online. It’s not as popular as Bitly or T.CO shorteners that are more commonly used on Twitter, but I do see it somewhat regularly. However, I don’t recall seeing an X.CO reference offline, until I saw this Samuel Adams New Albion Ale beer bottle.

I have no idea where my brother bought this six pack, but he said it was a special beer. It tasted pretty unique, but I didn’t think all that much of it until i saw the secondary label on the back of the bottle directing people to X.CO/NewAlbion. When you visit the url, you’re taken to a website with a Samuel Adams logo and a video with information about the beer.

It’s an interesting choice of a url, especially because X.com is a functioning website, and obviously if you visit that particular webpage in a .com, it’s a 404 error. Although Overstock saw traffic leakage with O.CO, at least that traffic ended up visiting a non existent website.