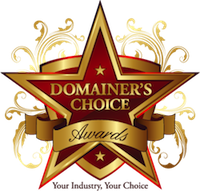 Nominations can be made by anyone, and submissions are welcome beginning on the morning of March 8, 2014. The nomination period will conclude on March 22 at midnight EST. Once the nominees have been tabulated, the top 3 most nominated people or companies will be up for each award, and voting will be managed by Votenet.com, a third party voting platform. Voting will run from May 8 through midnight on May 30th. Anyone is eligible to vote for the Domainers Choice Awards.

The winners of the Domainers Choice Awards will be announced during the 2014 DBR Fun Fest event, which will be held on June 28 at a ceremony in Dana Point, California.

I asked Donna why she decided to resurrect the Domainers Choice Awards, and here’s what she had to say:

“We are growing and maturing as an industry. I’ve often felt that many of our colleagues, as individuals or as companies, deserved recognition for going beyond what is required of them. Recognition from their peers. My goal is to provide a system that is as transparent and open as possible. I feel that a new layer of confidence has been added by hiring a third party voting company for the final tally. Everyone in the industry will be able to vote and I hope they all do! Like the slogan says, Your Industry, Your Choice!”

This event not only serves to award excellence in this business, but it is also a fundraiser. According to the DCA website, “Any funds received that are above and beyond expenses will go to the DomainersChoiceScholarshipFund.com. Details about this non profit 501c3 organization will be available soon.”

Here are the award categories:

You can read more about what each category entails on the awards website. I was proud and honored to receive a Domainers Choice Award back in 2008, and I am sure the people and companies you nominate will be honored and appreciative.