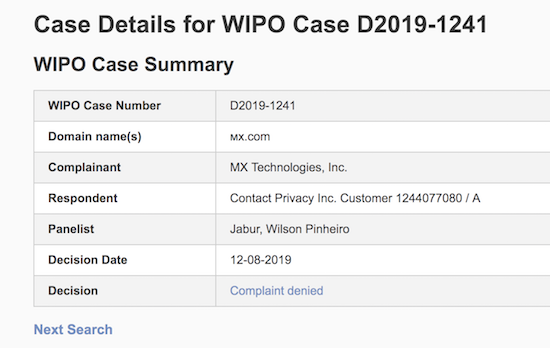 Here’s what the complainant alleged as the reason it filed the UDRP citing bad faith usage of the domain name:

The respondent in the UDRP made an informal response, but it only stated “that the disputed domain name was no longer his.”

In reaching his decision, the UDRP panelist (Wilson Pinheiro Jabur) reviewed the email submitted by the complainant that appears to have been the cause for concern. In the panelist’s view, the email was not specific to the domain name that was subject to the UDRP but was apparently a general warning about similar domain names. From the decision:

“The evidence submitted by the Complainant (Annex 5 to the Complaint) consists however of an email of March 5, 2019 sent to the Complainant by one of its clients, alerting the Complainant of the disputed domain name therein described as a “suspicious email domain that could affect MX” and further stating that “[w]e’ve seen multiple incidents where a lookalike domain was used to pose as individuals from the organization (usually via email) to commit fraud (payment of manipulated/fraudulent invoices) or trick the recipient into revealing sensitive information via Social Engineering”.

Because the complainant did not appear to submit actual evidence of bad faith on the part of the owner of the IDN domain name, the panelist ruled in favor of the respondent.

I was a bit surprised by the decision, but I can see why the panelist ruled the way he did. I actually think the easier decision would have been to rule in favor of the complainant, but it looks like he made the right call by reviewing the warning email and understanding it was apparently not specific to the IDN domain name. Hopefully the IDN does not get used for any trickery.