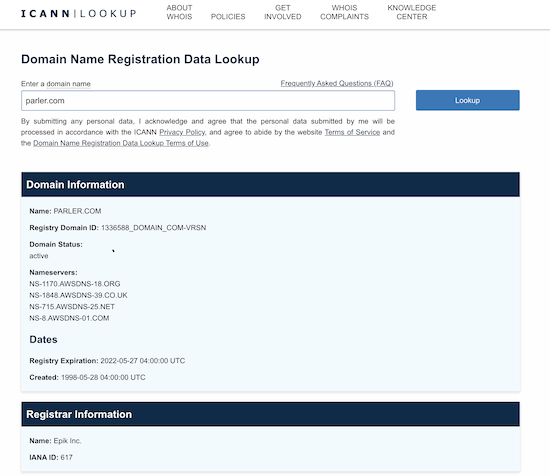 Whois records at ICANN show the Parler.com domain name, used by the Parler social network, has transferred to Epik today. The domain name had been registered at DreamHost before it transferred to Epik at some point within the past few hours. Parler has been used more frequently by US conservative politicians, groups, and supporters in light of President Donald Trump ban from Twitter, Facebook, and other social media platforms.

According to multiple news outlets, Parler has come under pressure from companies that provide services to it. For instance, Amazon is no longer providing its AWS hosting services to Parler. NPR reported that “Amazon had told Parler it would suspend its account Sunday at 11:59 p.m. PST. The website has been offline since that deadline passed.” The article also stated that Parler is “seeking a temporary restraining order to prevent Amazon from removing Parler from its servers.”

It is unclear if DreamHost asked or required that Parler transfer its Parler.com domain name to another registrar. The company did reply to a tweet mentioning Parler, but it was to clarify that the website was not hosted there:

We do not host parler(DOT)com or any of their content on our servers. If you believe that a hosting provider is hosting content which contains or promotes criminal activity, we encourage you to report it to law enforcement directly. FBI’s (IC3): https://t.co/ed85RMyMxs *MC

Earlier today, Epik published a statement on its blog related to Parler. The company stated that it “had no contact or discussion with Parler.” The company is also the registrar for Gab, another social media network that faced similar issues to Parler a little more than two years ago.

At this point, it appears that Parler is still facing downtime. It is not known whether Parler plans to use Epik for hosting or other services.

How to Request Bulk Auth Codes from NameBright

Registrars Respond to ICANN Statement About “Relief for Registrants”

Gab.com on the Move: Domain Transfers to Epik

Elliot Silver - February 25, 2021 6
Bird.com has been sold for $2.5 million at today's Right of the Dot live domain name auction. Fish.com was the next domain name up...

Elliot Silver - February 25, 2021 3
Right of the Dot is hosting an independent live domain name auction today at 12pm Central (1pm Eastern). The auction is being run on...

Domain Investing Mistake I Make Over and Over

Elliot Silver - February 25, 2021 5
I was on the Clubhouse domain investor chat organized by Jen Sale last Friday evening, and the topic of domain investing mistakes was brought...

Elliot Silver - February 24, 2021 1
Two weeks ago, I reported that Fairway Independent Mortgage Corporation acquired Fairway.com in a deal that was put together by Andrew Miller. The seller...

Elliot Silver - February 23, 2021 12
It's not surprising that Hallmark Licensing, LLC, the company behind the iconic Hallmark brand, would want to have the Hallmark.TV domain name. In addition...